We got up and went to the buffet breakfast in one of the hotel’s restaurants.  After that, we got ready to depart at 9am for a daylong city tour.  There were four full-size buses, each with 17 or 18 guests.  We had a driver, a guide, a guide helper, and a fourth person that helped you get down from the bus, stopped traffic for us, and generally kept track of everyone.  We got the feeling that they were kind of like security, but not exactly.
Quito is at about 9250 in altitude in a valley with mountains around it.  It pretty much seems like a regular city of 2M people (the second largest city and also capital of Ecuador).  You see a lot of Ecuador native peoples wearing a traditional dress, which is usually a hat and poncho of various colors.  They are usually selling something because most of them don’t have any formal education. 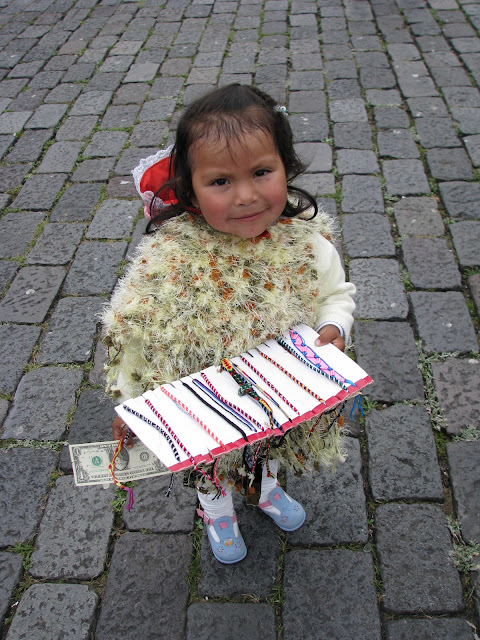 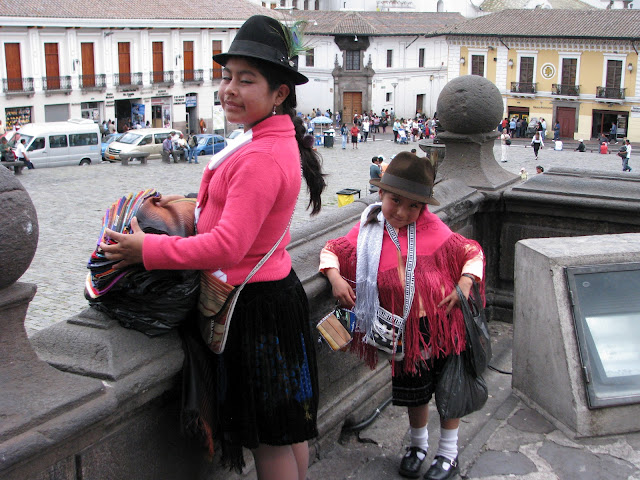 We visited a number of churches and the presidential palace.  One of the churches run by the Jesuits was just covered in intricate details with tons of gold leaf everywhere.  It was an amazing site (no pictures allowed). 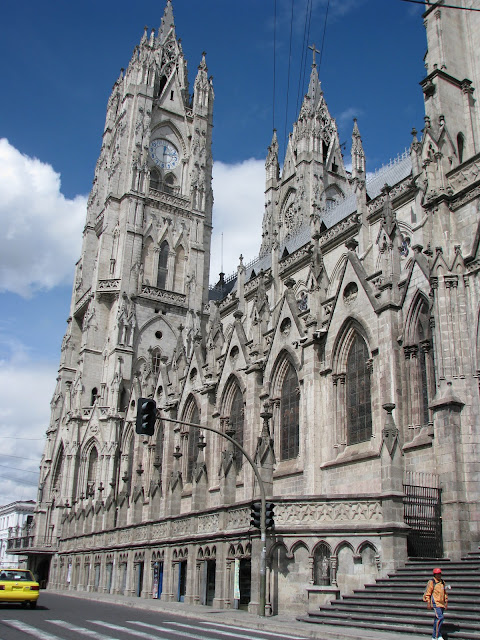 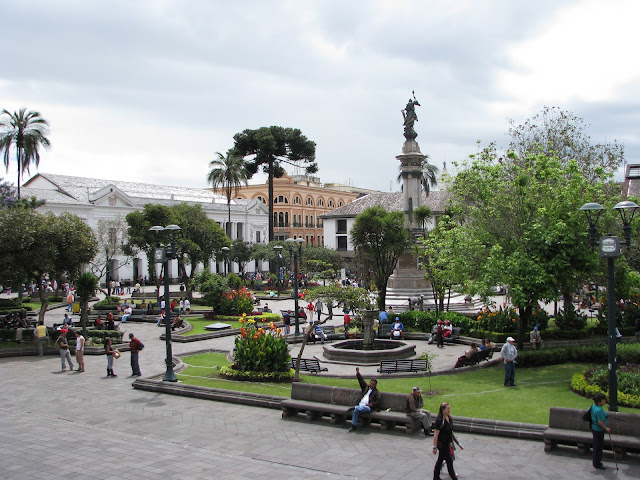 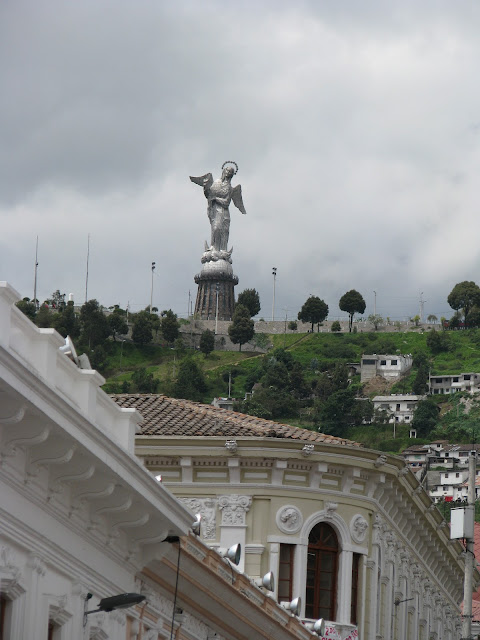 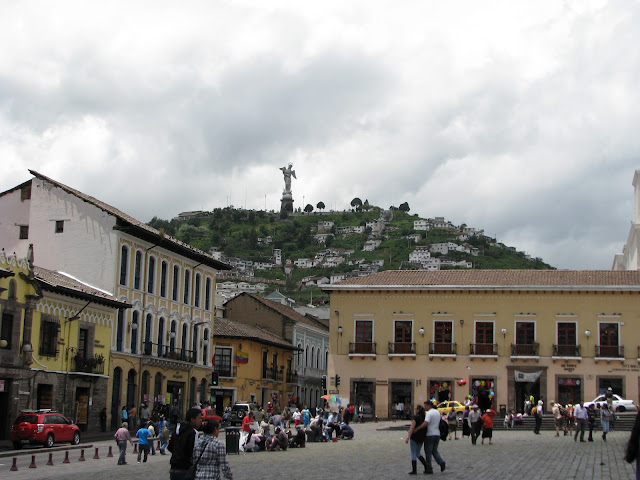 For lunch, we went to a restaurant that was part of the opera theatre.  We had traditional Ecuadorian food and then were entertained by a singer who did everything from opera to more popular music.  He was quite good.  BTW - this is where we first met Steve and Mitch from South Carolina, as they sat across from us at lunch. 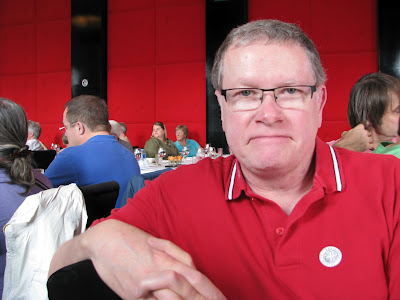 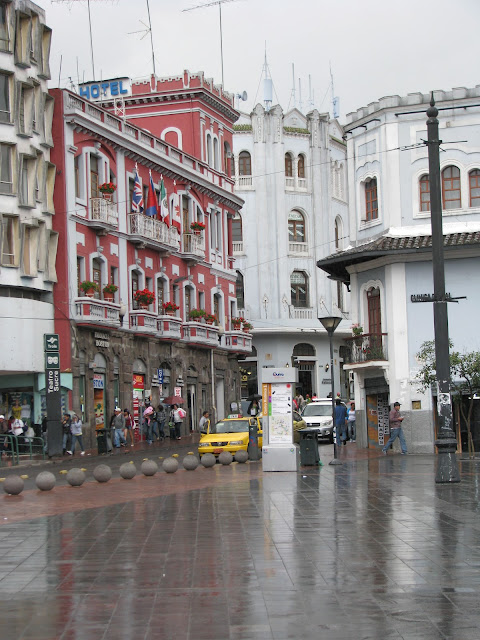 After lunch, we drove about an hour outside of town to the Equator Park, which they call middle of the world.  This park had a nice monument that showed the various compass directions and the longitude (as latitude was 0 0 0).  Naturally we took a picture of Bob standing with one foot in the northern hemisphere and the other in the southern.
Julie standing in front of a map of the Galapagos.  This was inside the huge monument to the equator (which was on the equator): 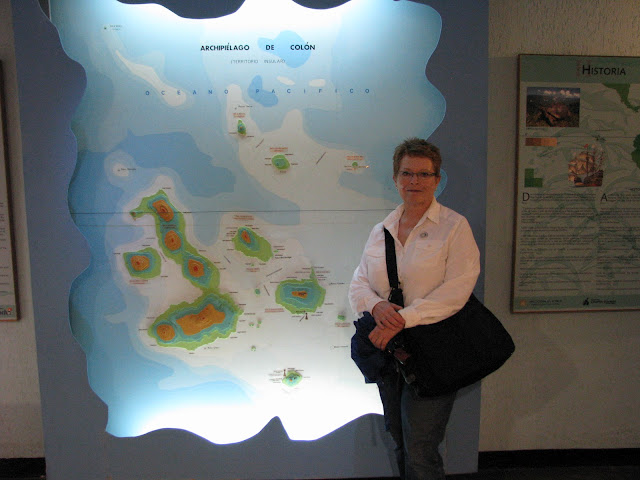 At the top of the monument is an observation area where you can see some of the mountains around: 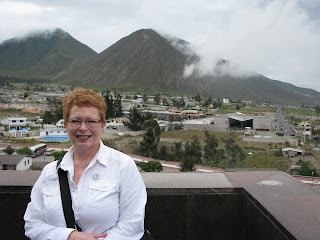 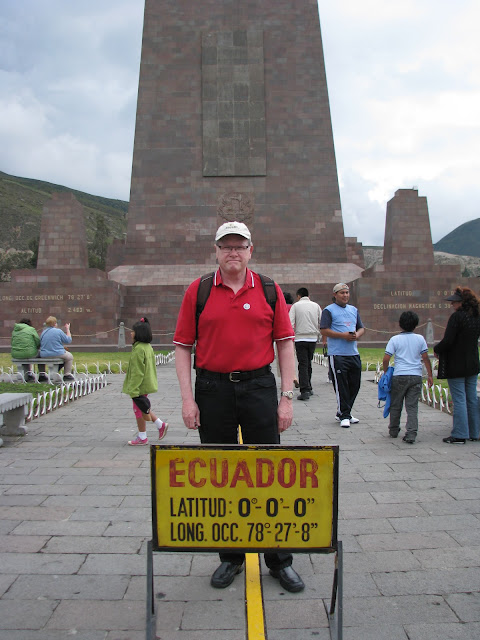 We then went back to the hotel for a bit of R&R and getting ready to go to dinner.  Inside the hotel, all over the place were roses.  They are a common export crop from Equador.  In fact, our guide told us that you could buy two dozen roses for $1.  This was inside the lobby: 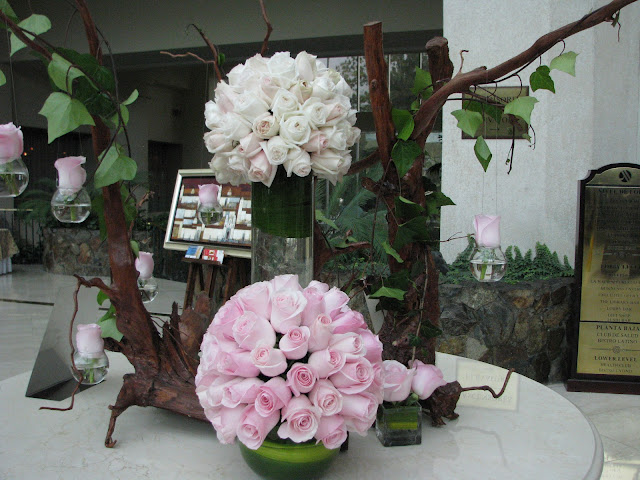 Dinner was at Carmine’s, an Italian restaurant that is supposedly the best Italian restaurant in Quito.  We left at around 6:15 for dinner (it was a short 10 minute ride).  Dinner was a choice of vegetarian pasta, a chicken dish, or fish (which alternates, this night it was Ecuadorian sea bass.  Dinner ended at about 8pm when we were hauled back to the hotel.
That night, we had to pack up the two suitcases that we were going to take on the ship (limited to 44 pounds in weight – due to limits on the charter plane that was taking us there) and drop them off by 9:45.  They were then secured.  Officials came and inspected them at about 5am to make sure that we were not carrying into the Galapagos any banned items (such as fruits, veggies, and seeds).
Posted by Bob at 5:13 PM