Throughout the night, we traveled south to Gardner Bay, Espanola.  This is one of the oldest of the Galapagos Islands.  It is located in the south east corner of the archipelago.  It turns out that the Nazca tectonic plate is underneath the islands and it is slowly moving (about 3 inches per year) toward South America.  The plate is moving under the plate that holds South America and because of that and erosion, Espanola is slowly disappearing.  It is a very flat island, with hardly any signs of volcano cones or craters.
After breakfast, at 8am, we had a snorkeling and water safety briefing.   Then we boarded the zodiacs and headed to the shore for a beach walk and optional swim or snorkel.  We did a “wet landing” which means the zodiac gets close to the shore and you jump into the water and onto land.  This was uneventful as we wore our tevas and water shoes. 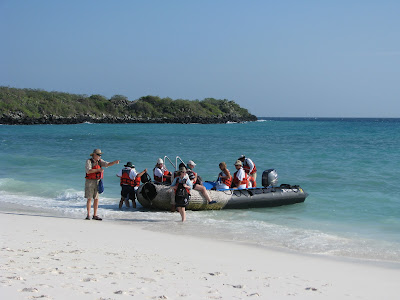 On the beach were hundreds of sea lions, lounging around, and sunning themselves.  There were tons of sea lion pups.  We learned that the gestation period is about 9 months and that once the pups are born, they grow a lot in a very short time.  The mom’s go out and fish (leaving them for several days) and then come back to feed the young. 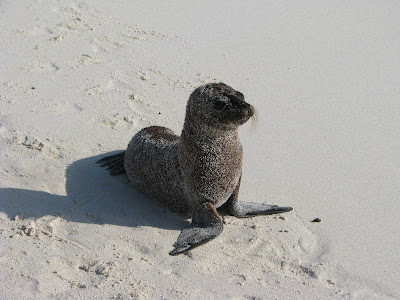 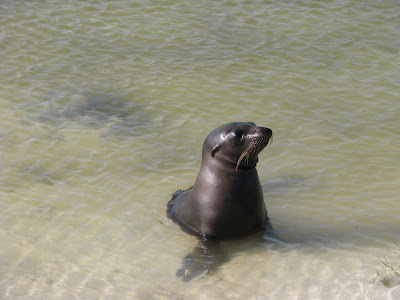 This pup is nursing (they made a very loud sucking sound): 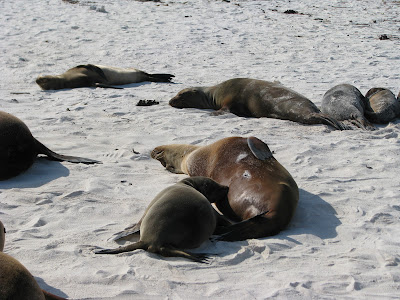 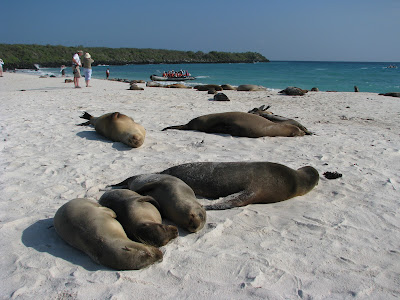 We also saw one marine iguana (about 2 ft. long) and a bunch of bright red crabs. 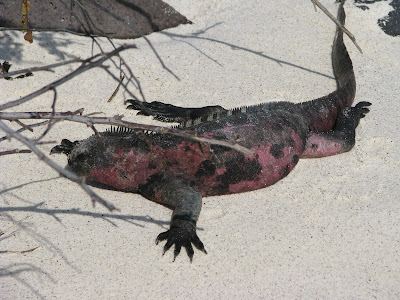 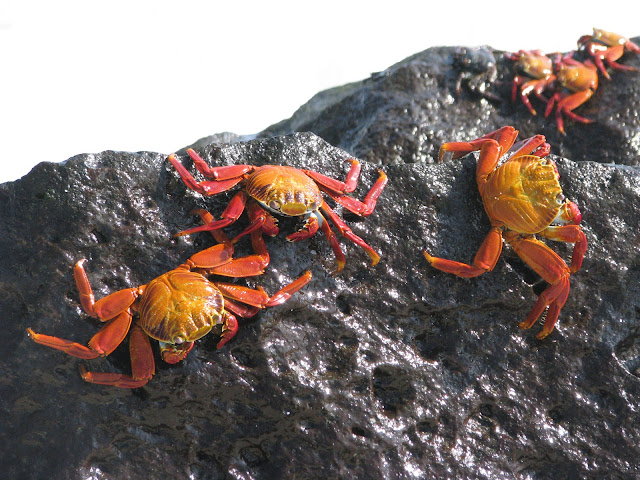 BTW – on the ship there are seven Galapagos National Park certified naturalists.  Each naturalist guides a group of no more than 16 guests on each excursion.  They know so much about fauna and flora, geology, and other parts of the islands to make every excursion amazingly educational.
After the walk, we returned to the drop off point with the intention of going snorkeling.  Unfortunately, the waves for so high that the water was murky and hard to see anything.  So, we just enjoyed a swim.
Once we were done, we boarded the zodiacs for the trip back to the ship.  Julie had a bit of a problem as the waves were extremely high and so boarding the zodiacs was difficult, Julie got dumped into the water before she was able to scramble over the side and into the boat.
Back on ship, we had lunch at the Beagle grill and hung out for a bit.  We then returned to our cabin and had an afternoon siesta (ahem, a “nap”) for about an hour.  The ship moved around the island to the western side (we were on the eastern side) and anchored off Suarez Point.
Here we had a choice of a long walk or a short walk.  You got to see roughly the same stuff on either, except the long walk was a very rocky hike and you went far enough to get to a blow hole.  BTW – this was a “dry landing” which means that there is a “pier-like” place where you can just hop out walk without getting wet.  We were successful and began our walk.  Although instantly on the rocky pier like thing, we met a bunch of marine iguanas.  They were sunning themselves or protecting their females.  The bigger ones were about 2 feet long with red, brown, and black colors. 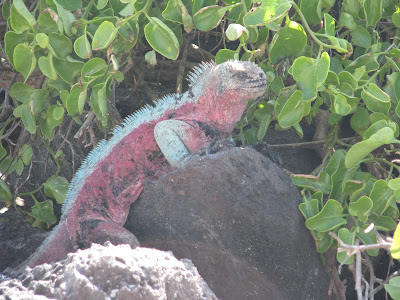 Just around the corner, we came to another beach with a bunch of sleeping sea lions.  BTW, sea lions and seals are very similar.  Sea lions have external ear flaps, while seals have holes with membranes over them.  Sea lions also have external genitalia.  One young one of them in particular came up and tried to sniff us. 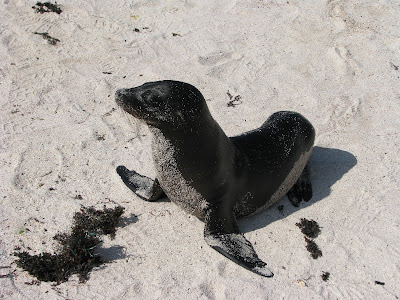 You aren’t supposed to let them touch you as they could get sunscreen transferred to their faces or whiskers, which can decrease their sense of smell (their eyesight isn’t great, so they sniff around to find their mothers).  We also saw some more iguanas living in the same area, cohabiting the same beach.
We proceeded to walk along the very rocky landscape (with igneous rocks) and observed the Nazca booby, including babies in nests varying from 2 to 4 months old. 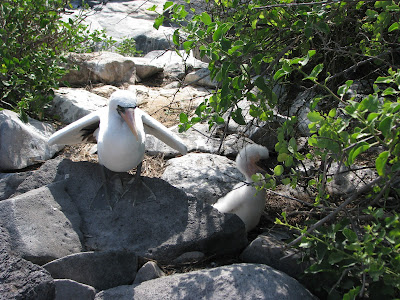 We also saw two young blue-footed boobies (yes, they really do have blue feet, although being young, their feet aren’t as blue as the adults). 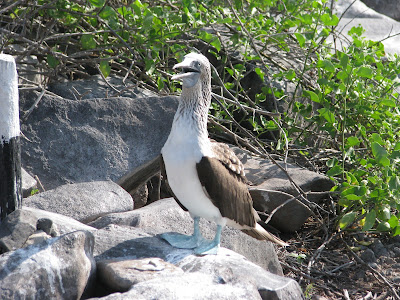 The ocean vistas were beautiful. 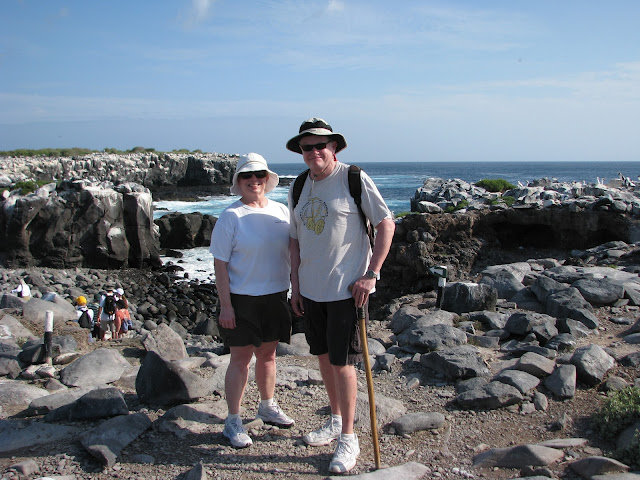 After about 2 hours, we headed back to get back on the boats.  Unfortunately, the waves were so high in the “pier” area that it was washing out the pier.  So, we had to climb over some rocks to get to the zodiac.  Fortunately we all made it safely and headed back to the ship.  Once everyone was on board, the zodiacs were stored, we headed for our next island to the west, Floreana Island.
We then got ready for a pina colada cocktail party at 6:45, our nightly briefing on the next day’s activities at 7:30, and then dinner after.  As usual, we had dinner with Steve and Mitch.
Posted by Bob at 5:40 PM