After sailing all night, we ended up at Pointe Morena.  Here we had a choice of a long walk and short zodiac ride or long zodiac ride and short walk.  We chose the latter.  The zodiac ride was spectacular.  The focus this time was mostly on birds.  We saw blue-footed boobies and flightless cormorants. 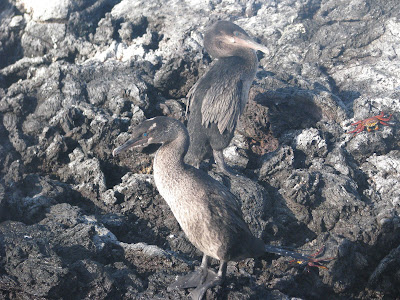 The cormorants evolved to be flightless because they didn’t have any predators and could just fish to their hearts content.  The boobies were great, and we even saw two of them going through a mating dance.  The male moves its feet up and down showing how great their feet are.  They then open and close their wings.  They also knock their beaks together.  If the female accepts, she starts imitating the male. 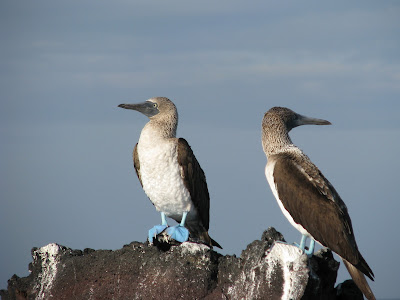 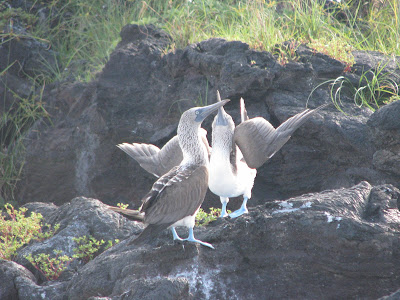 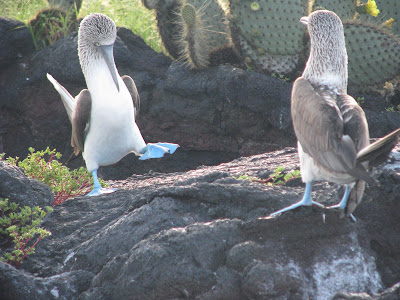 We also saw some more black iguanas that you could hardly tell were there because they blend into the rocks so well.  Notice the baby ones hanging on the wall: 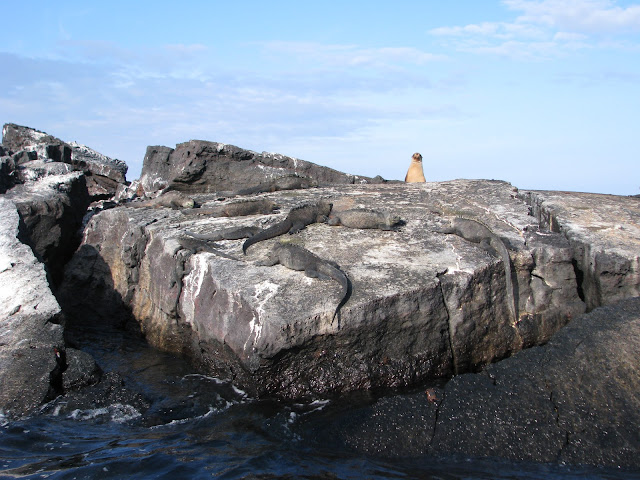 After the ride, we did a dry landing onto a lava flow.  We wandered around the flow for almost an hour, but hardly moved more than about 500 feet.  We learned about the flora and some of the geology.  There also was a brackish lagoon with a turtle and some porcupine fish in it.  We then returned back to the ship. 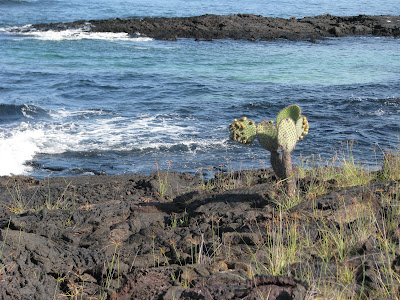 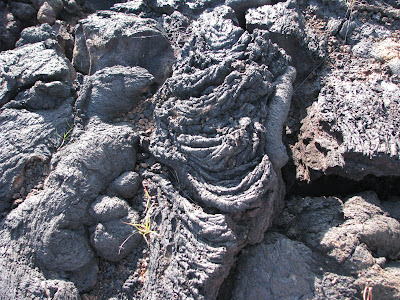 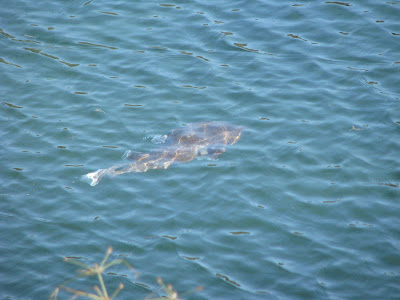 Lunch today was an outside BBQ that included shrimp and lobster. 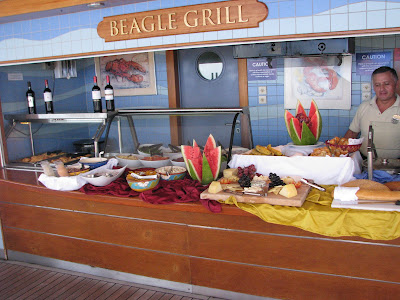 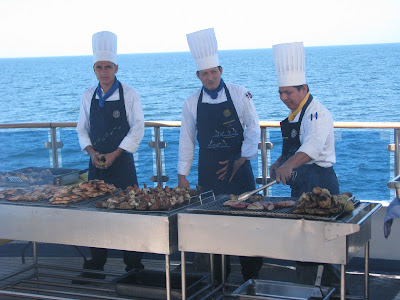 For the afternoon excursion, we first sailed to north to Urbina Bay, still on the Isabela Island.  Bob decided to do the “long walk” which was about 2.5 hours and about 3.5 miles.  Julie decided against it because it supposedly included “rock climbing”.  We did a wet landing on lava sandy beach (Bob did this barefoot and then put on his tennis shoes for the long walk).  We headed north along the shoreline walking in the lava sand.  We had to walk across lava fields (the Aa type – which is very craggy).  We saw some marine iguanas, a blue heron that was fishing in a tidal pool, a lava gull. 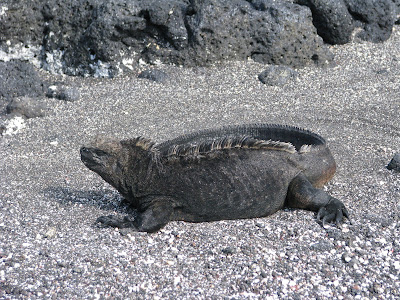 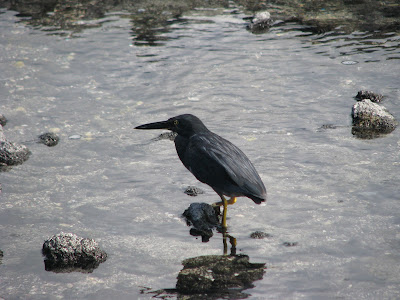 The lava gull is endemic to the island and it is only found on the Galapagos.  There are only 900 of these birds in existence, so they haven’t adapted very well for breeding. 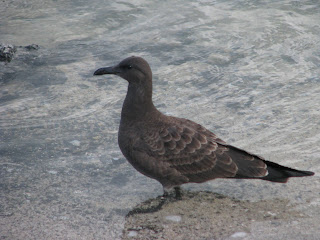 The scientists don’t know why.
There wasn’t really rock climbing like we think of it (scaling something), it was more like bouldering, where you have to climb small boulders or hop down from the boulders (all of these made from lava of course).  The interesting thing about the area is that it was all uplifted from the sea line back in 1954.  This happened in some earthquake that raised the area about 15 feet, which put undersea above the sea.  There were pieces of coral all over the place, including a bunch of huge brain corals. 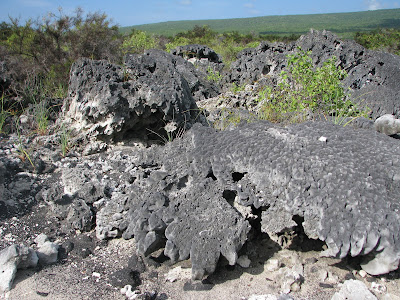 Eventually we turned inland and walked along an area that felt like walking in a stream bed with very lush vegetation on each side.  This is the rainy season, so everything is very green (apparently in the dry season, most of the green stuff dies off). 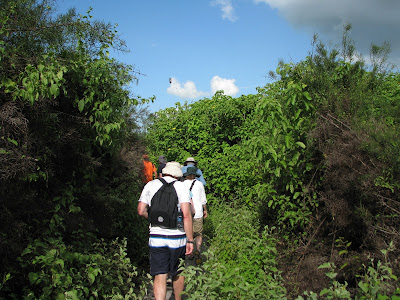 Along the trail we saw our first land iguanas.  They have pointy noises where the marine iguanas have flat ones because they eat the algae that is clinging to rocks under the water.  Also, the land iguana has only spikes on their head and neck, while the marines are along their whole body.  Of course, they are very different in color (black or Christmas vs a more yellowish color). 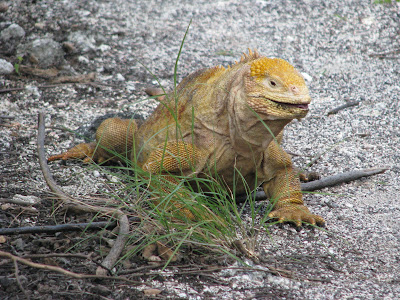 Along the way we spotted giant tortoises varying in size from about a foot (a baby that was only about 10 years old) to ones that were a good 3 feet long that were about 70 years old or so (they can tell by the rings or lack of rings on the shell).  They lumbered along in the fields or the pathway. 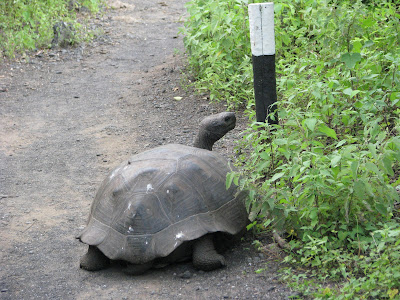 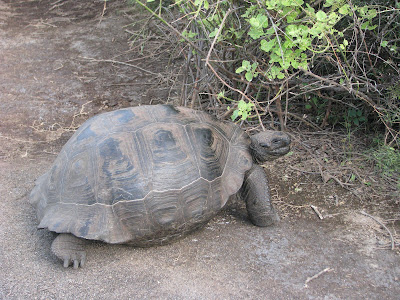 After a couple of hours, we returned to the beach for an optional swim (the snorkeling was too murky).  Bob decided to head back to the ship.
The nightly cocktail party before dinner was a wine and cheese tasting.  We had dinner with our usual tablemates, Steve and Mitch from Greenville, South Carolina.  After dinner, we went to a talent show that included several of the naturalists performing (singing and guitar playing), a dance number in costumes put on by the stateroom attendants, and then Mitch got up and sang two songs and played the piano.  He was very good.
After the show, we headed up to deck 6 where one of the ships crew and the cruise director talked about the constellations that were visible.  They used a laser pointer thing that made it easy to spot what they were pointing out.  Being at just below the equator, we could easily see the Southern Cross.
Posted by Bob at 6:16 PM