Puerto Aroya is located on the south side of Santa Cruz Island (we were on the north side the previous day).  We entered the bay and dropped anchor at about 6:45.  There were huge swells coming into the bay and the ship was rolling a TON (it continued this all day long).  It must have something to do with the flat bottom of the ship or something.
Anyway, Puerto Aroya is an inhabited city of about 15K people.  It includes the Darwin Center where they work to do the research end of things for the National Park.  We got off the ship at 8:00 am and took the zodiacs into a dry landing at a pier.  There was a bus waiting that took us the very short 1km drive to the Darwin center.  Our naturalist (Will) guided us through the facility.  We learned about dome shaped and saddle back tortoises.  The saddle back ones is actually the ones that were first discovered by the Spanish and they ended up naming the islands Galapagos which is the Spanish name for a Spanish saddle, which their shells resembled.  There were originally 14 different species of tortoises on the islands (the dome shaped ones are on the big islands with volcanoes and the saddle back ones are on the small, ones without the volcanoes).  It is clear that their difference is due to the environmental adaptation.  Three of the 14 are already extinct and one of them has only one tortoise left – Lonesome St. George, which is housed in the Darwin Center.
Will showed us some tiny, baby turtles (born in 2012 and they were about 5 inches long), wandering around a pen.  Since each island has its own species of tortoise, they have to keep them separate to make sure that as they age they are taken back to the proper island (which is usually when they are about 5 years old). 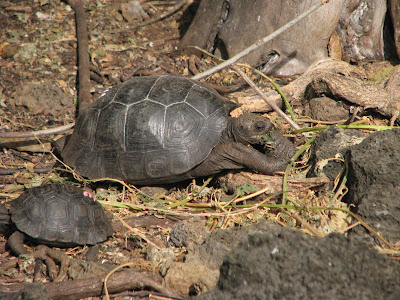 The Center goes out and collects tortoise eggs from the egg nests, bring them back to the Center and incubate them until they hatch.  One interesting fact is the eggs are asexual when they are laid.  Then depending on the temperature of the nest area (and in this case, the temperature of the incubation) they are either male (28 degrees C) or female (29.5 degrees C).  They have a whole processing center to help the tortoises grow and get big enough that they can survive out in the wild.
They have been highly successful, for example, one of the islands went from 14 existing tortoises to over 1000 due to the raising program.
Next we saw Lonesome George, a giant tortoise from an island in the northeast (Pinta).  He is the last surviving member of his species.  He has been in captivity for the past 40 years and for the last 20 or so they have been having 2 female tortoises that are similar in DNA (although not exact) and trying to convince him to mate with them.  No luck so far.  So, unless they can figure some way to get him to reproduce, they will lose another species.
This is Lonesome George: 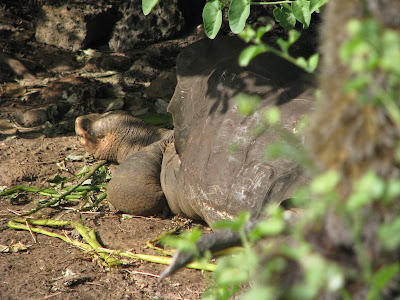 We also saw some more giant tortoises that are well over 100 years old and very large (they continue to get bigger the longer that they live). 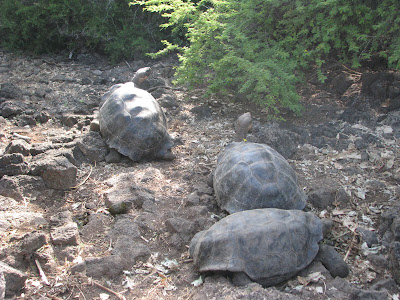 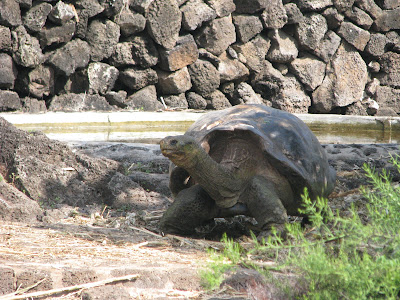 After that, we headed out of the Center area and walked through town back to the pier.  We bought some souvenirs and then returned to the ship. 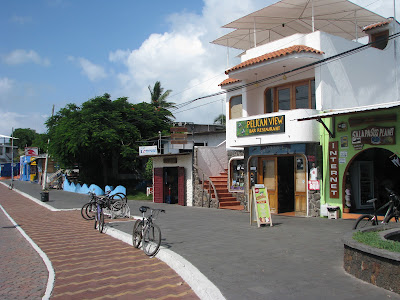 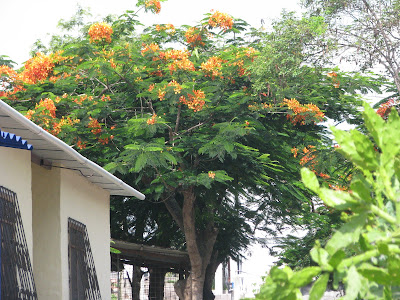 We had lunch with the head naturalists.  She told us that the islands are around 300 miles wide and 225 miles high.
The afternoon tour is a 45-minute bus ride to the highlands.  An hour or so walk around some fields to try and discover some tortoises in the wild and then another 45 minute ride back.  The first bus was sitting there with the windows open.  One of the guests noticed this and looked at the second bus waiting which was sitting there with its windows closed.  He asked if we could use that bus and the answer was yes, so we got an air conditioned bus instead of 860 bus (8 windows open going 60 mph).  The bus hauled us up the side of the mountain.  It was very green with lots of trees. 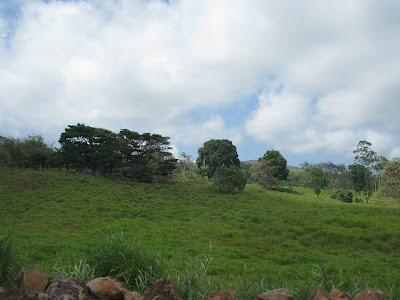 The sky was a bit overcast and the temperature dropped as we went higher up the side of the mountain.  Eventually we made it to the tortoise reserve.  The area is owned by a bunch of farmers and is the only place where you can find them in a space that tourists are actually able to find them without hiking to the tops of mountains (it is very rare to be able to find them down near the ocean like we did – as they mostly hang out up in the highlands).  The national park does this so tourists are guaranteed to be able to at least find some “in the wild”.
The highlands can be really wet and muddy.  They apparently have rubber boots that you can get so you don’t wreck your shoes.  Fabrizio didn’t offer them to us as he heard it was ok, but other naturalists did have their people wearing them.  It was certainly damp and in some cases muddy, so you had to be careful where you walked.  We ended up seeing about a dozen tortoises, some were very old and very large. 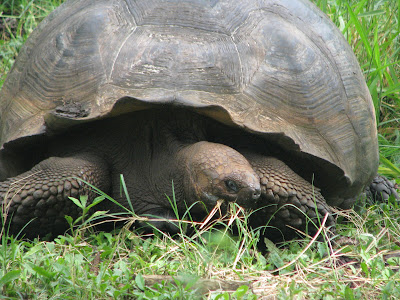 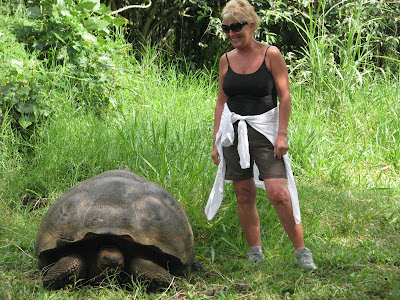 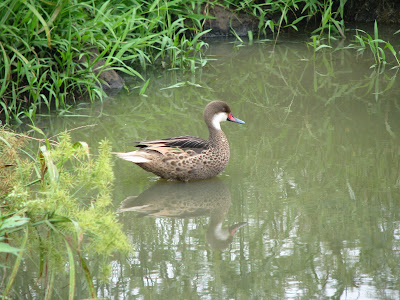 This is Julie's favorite tortoise picture: 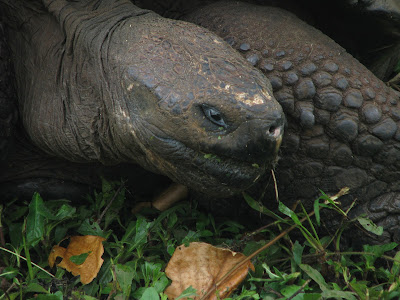 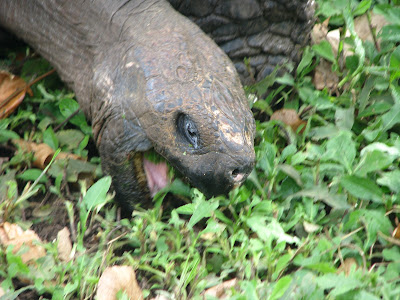 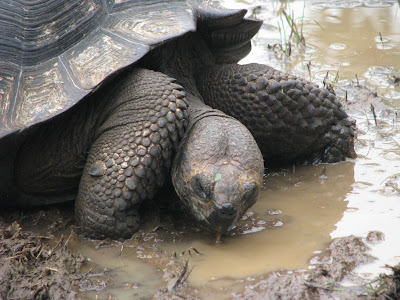 Fabrizio offered the following guidelines for how to live a long life just like a tortoise:
He said that if you follow these guidelines you could live to be hundreds of years old.
When we were finishing, the guides (first Fabrizio and Marvin, and then Marvin wearing it like a teenage ninja turtle) put on a shell from a dead tortoise.  It was amazing: 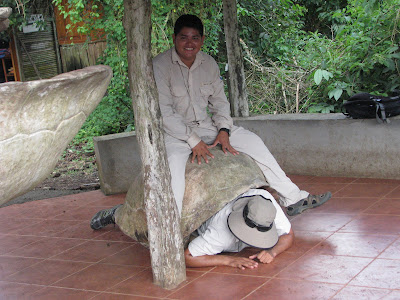 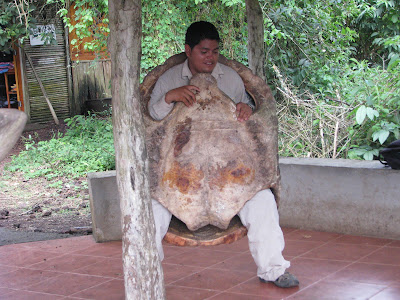 After the walk, we stopped at the gift shop/snack bar for 10 minutes and then headed for the bus.  We were delayed after one of the guests in front of me figured out that he lost his camera.  His wife had stayed on the ship and he said that she would kill him because all of their pictures were on the camera.  Eventually, John from New Zealand, the camera guy with two long zoom Nikon cameras found the guys camera on the ground.  Whew.  While we were leaving the guy who lost the camera said, don’t tell my wife, she will never let me go by myself on an excursion with a camera.  The guy next to me quipped, ok, what bribe are you going to pay?
Next stop was a lava tube, which we walked down a bunch of steep steps to get into.  The lights were on and it was really cool.  It was about 30 feet high and about 20 feet wide.  The floor was wet and muddy in spots, so those that managed to keep their shoes from getting wrecked at the tortoise place had to be very careful in the tube.  Note – Bob later learned that some of the groups that were in there before us, the lights were off and that would have been not nearly as much fun.  Yes, you may have noticed that we were the first off the ship, but not the first to the lava tube.  We have observed that Fabrizo enjoys guiding so much that we end up spending more time than normal.  As near as Bob could tell, we were the third group to go down the lava tube. 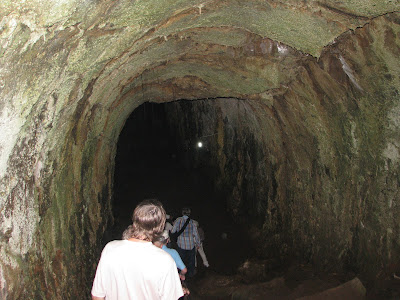 We eventually made it back to the port and boarded the zodiacs for the trip back to the ship.  When we got off, they turned on the shower things to wash off your shoes.  They even had scrub brushes to get them clean.  Bob had taken his old tennis shoes on the trip and just took them off and dumped them into the trash.
Tonight is the last night, so they did a slide show presentation (the guides are always taking pictures) during the cocktail hour.  It was great and at the end they gave everyone a copy of the slide show and the raw pictures that they had taken.  The naturalists really got a lot of great shots, many which we will integrate into with ours.
Next was dinner and then we packed, put the bags out (you can leave our bags in the hallway after dinner, but at least by 5am), and hit the sack.
Posted by Bob at 8:32 PM