We arrived in port at about 8am.  We had a private tour scheduled through the Guggenheim museum.  We met the rest of our party (Cruise Critic members) at 8:30 in the atrium to catch the first shuttle scheduled to leave at 9:00 am.  It was a 30-minute ride and they dropped us within about four blocks of the Museum.  We walked those blocks and got our first glimpse of the museum.  It is an amazing sight, very “organic” with lots of weird shapes.  We heard that there are no two steel beams that are the same in the entire building.  The building is mostly covered in .3mm thick titanium panels, which adds to the interesting shape of the building.

One exhibit on the outside is a giant dog (maybe 40 feet high) that is covered with flowers.  Unfortunately, they just started replacing all of the flowers this day, so the statue was buried behind scaffolding and mesh.

We wandered around the back to the group entrance and checked out a couple of external installations (the giant nest of silver balls and the giant female spider). 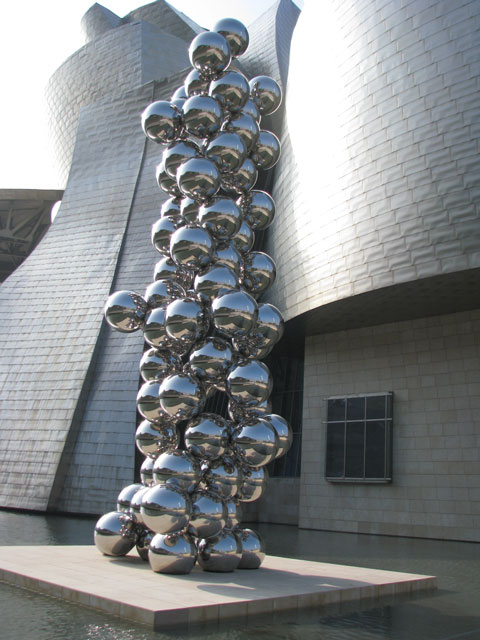 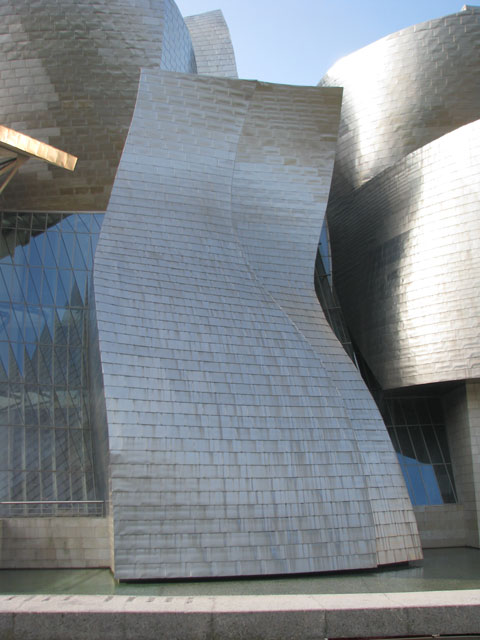 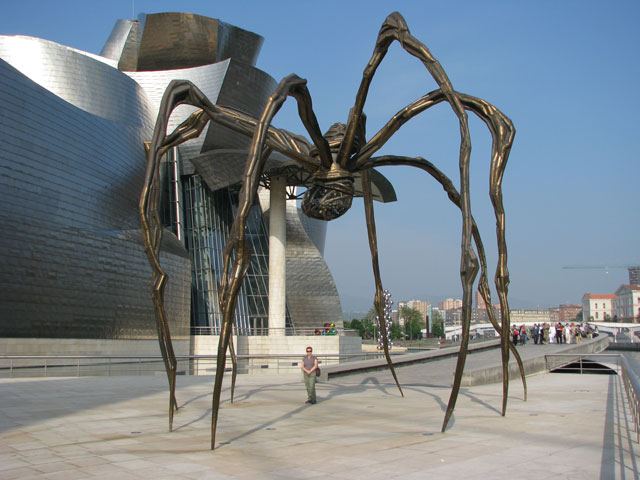 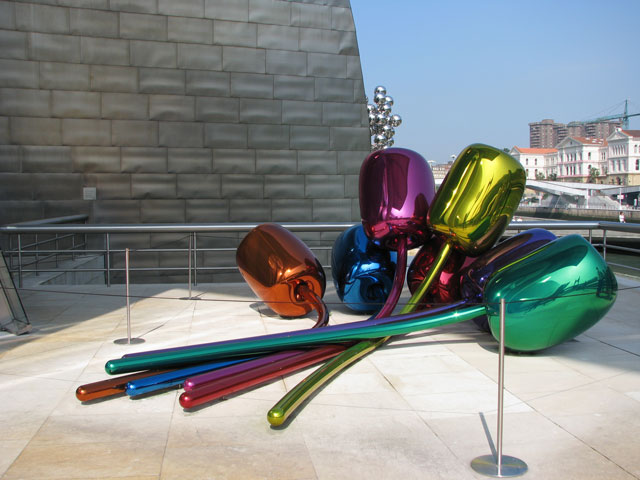 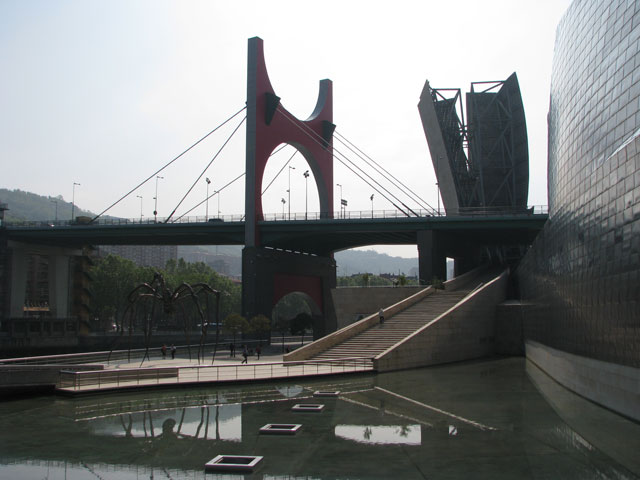 You could not take photographs in the museum except in the atrium, so we don’t have any images.  However, we were able to take this picture of the exhibit called the snake which is a set of seven exhibits of very large steel forms that you can walk through and experience.  When we went through the first one, we actually got dizzy which is part of the intentional experience of the exhibit. 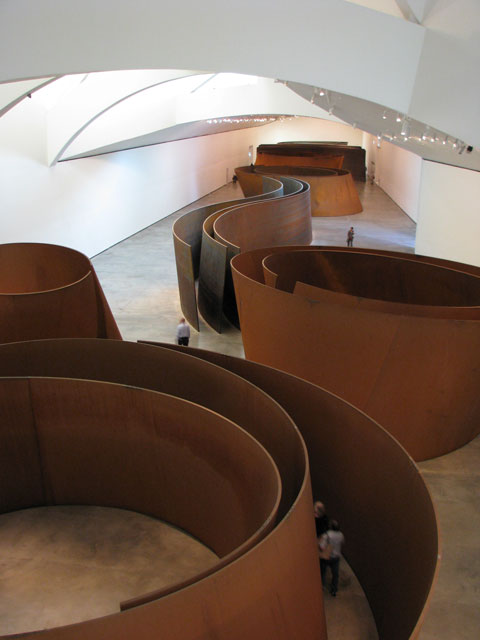 Overall, our consensus was that the physical museum was amazing, but so many of the installations were just plain weird.  For instance, two very large canvases that were colored all in pink.  Or, the string of lights hanging from up above and draped on the floor.  That was it.

Again outside, they also had an exhibit which was fog.  It came out every hour for four minutes and enveloped the various areas on the back where the water was.  It also enveloped Alex and Brenda: 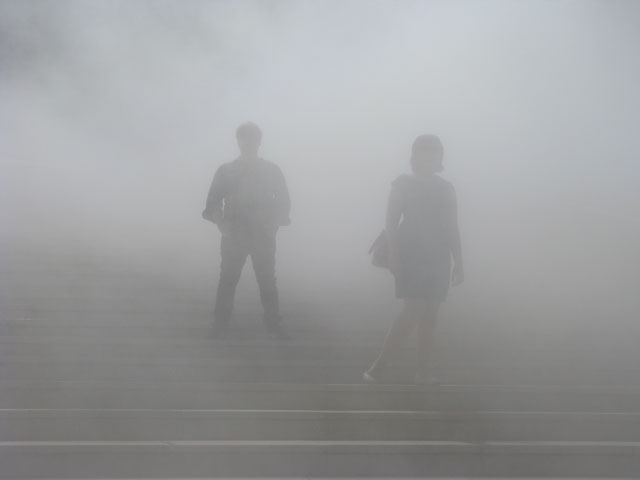 After the museum, we walked along the river and made it to the Old Town portion of the city.  It was quite nice with narrow streets and a ton of shops and people. 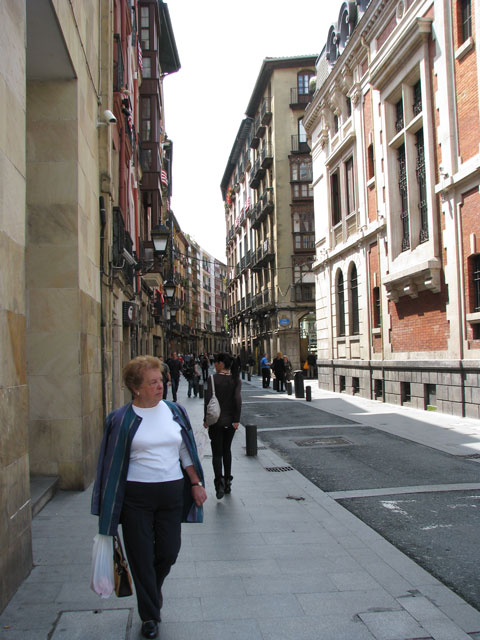 We also made it to the largest indoor market in Europe.   It was a very modern market. 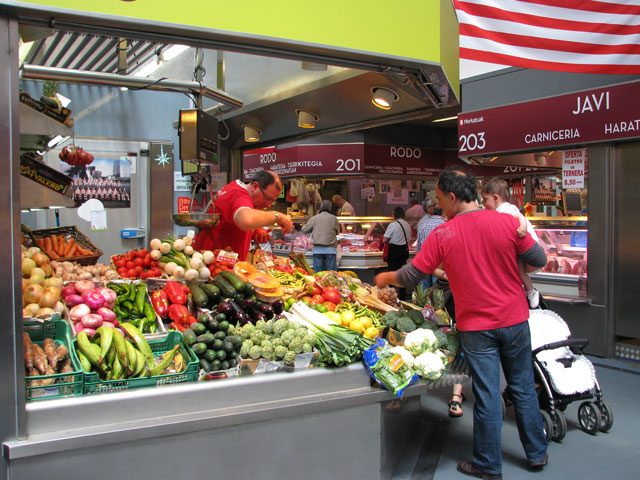 Once we finished wandering in the old town, we made our way back to the shuttle bus location and went back to the ship.  BTW – we read in the Reflections guide that a cab would have cost us 50 Euros to go from the ship’s dock to the center of town.  The shuttle really saved us a lot of time and money.


Back on the ship, we hung out (we had afternoon tea again) and then went to dinner in Prego again.  As usual, the food was marvelous.  The entertainment was John Courtney, a comedian piano player who was excellent.
Posted by Bob at 6:43 AM