This was a tender port and is the first time that the ship has visited this French port.  We were scheduled to start tendering at 8am, but the captain came on the speakers saying that they were very worried about the wave action and it maybe was going to require them to cancel tender operations and recover the guests on shore.  The problem is that the ship had to anchor outside of the breakwater.

Eventually the seas calmed down and the operations began.  We had a leisurely morning because we didn’t have a tour until 1:30pm.  After breakfast, we asked if it was ok to get off the ship early and meet the tour at the pier.  They said sure, just show up by the same time they were meeting in the Starlight lounge.  So, we got off at about 11am.

From the sea, you could tell that this was a very picturesque town.  There is a HUGE beach that dominates the shoreline and a bunch of houses and buildings most of which were white with red trim.  The city is just beautiful (it has about 15,000 residents).  It is the location where King Louis XIV and Marie Teresa were married. 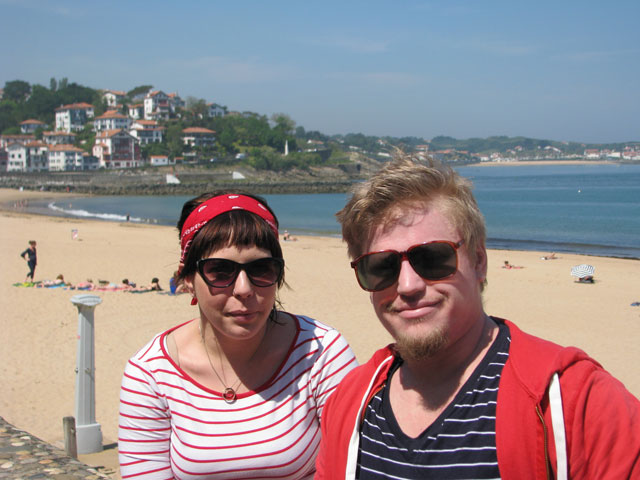 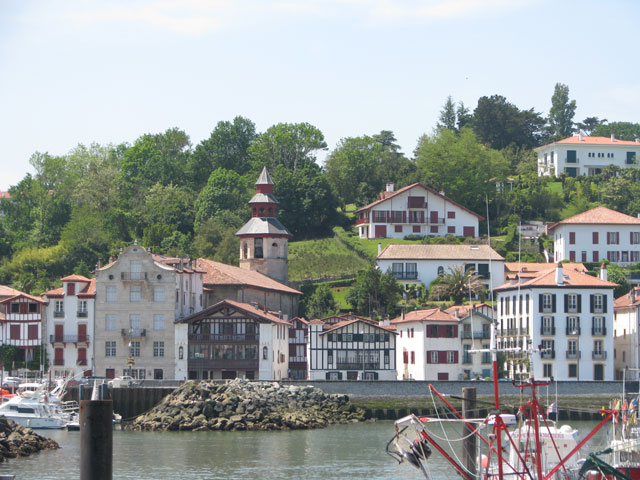 There are a bunch of narrow streets with restaurants and shops.  It is just beautiful.  We stopped at a patisserie to buy half a dozen macarons which are very different here in France than the US version (one flavor and one layer).  They were great.  Eventually we landed at a restaurant in the main square and sat down for some coffee and beer.  It was fabulous. 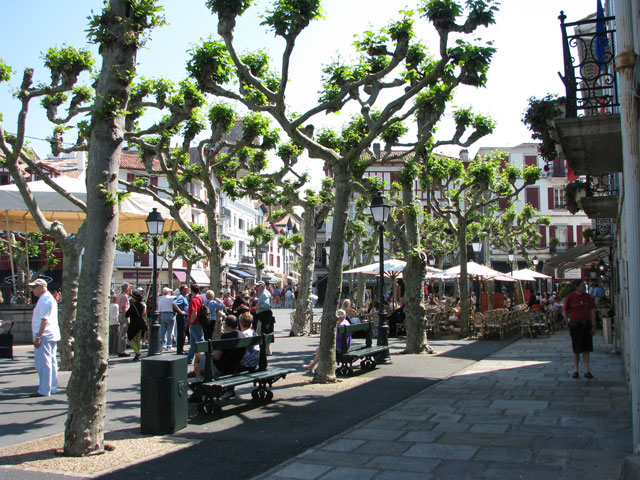 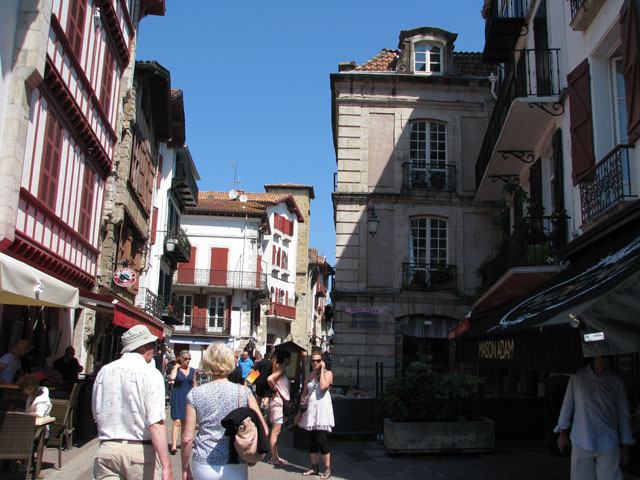 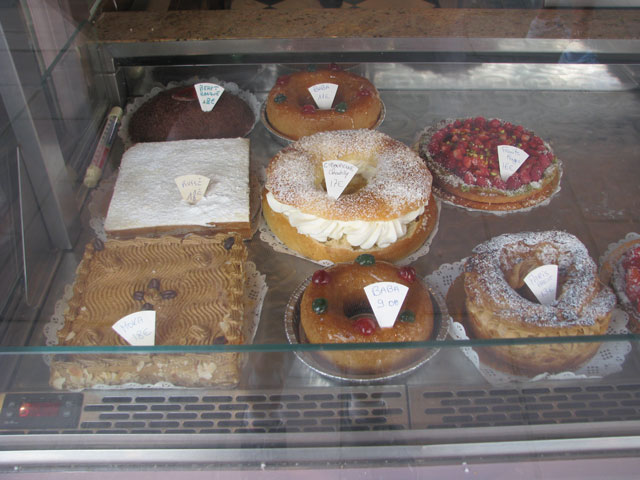 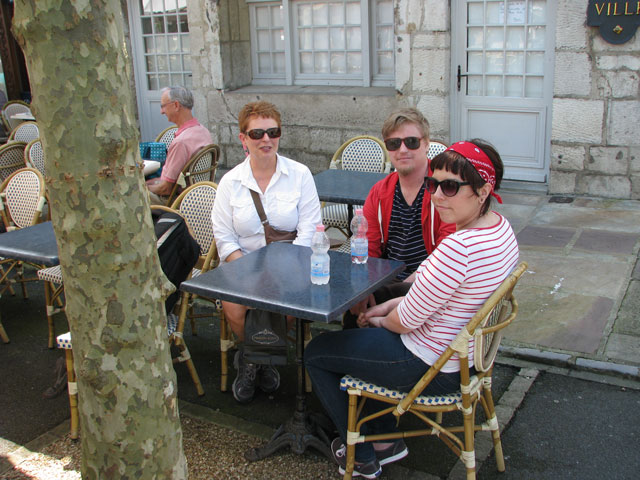 At a bit before 1:30pm, we wandered over to dock area and waited for Jim and his crew to put us on a bus for our tour.  It was really hot, in the 80’s.  We eventually made the bus and headed out of town and up in to the Pyrenees into the heart of Basque country.  Most of the Basque people live in Spain (several hundred thousand), but a few (ten’s of thousands) live in France.  The Basques are very impressive.  They have lived in the area for 10,000 or more years (some say that they go back to Cro-Magnon era) because it offers access to the sea, a great climate, and the mountains for protection. 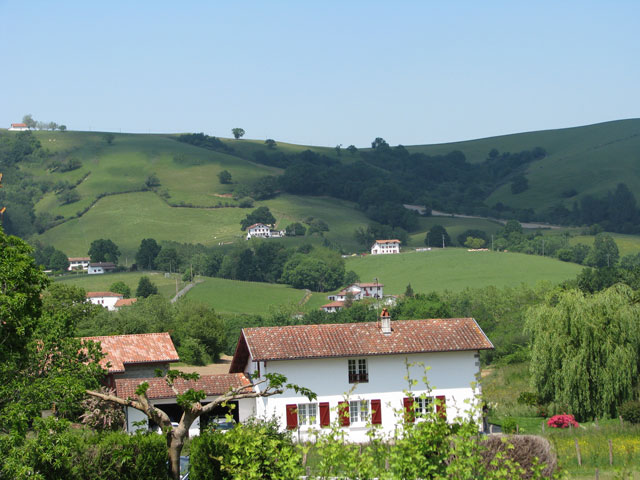 As we drove up the mountain, the guide told us more and more about the incredible Basque people.  For example, the houses are painted white because they didn’t have anything to create pigments with.  The red wood trim was blood from animals (originally) which protected the wood.  Each house owns the family that resides in it.  Yes, I said that right, the house (and land) owns the family.  The way it works is the eldest child (man or woman) is in charge of the house.  They inherit it when the parents die.   If the eldest child does not wish to stay, then it goes to the next in line.  Younger brothers and sisters who are unmarried may live in the house and work for the house.  The oldest child looks around to marry a non-eldest child in a different family (there is no merging of houses).  In a very pragmatic way, they don’t get married until they can prove that they can have babies by having one or two first before marriage.  It does not serve the house if the person in charge can’t have children to take over.

Another interesting and progressive fact is that the person in charge of each house gets to vote on issues affecting the area (whether female or male).  This way of voting dates back 400 years.  The guide talked about how the Basque people were involved in an awful lot of history.  It is absolutely fascinating.
We ended up in a very small village named Ainhoa.  We visited a Basque church and spent a bit of time wandering the town (every town includes a wall for playing their ball game – like handball with paddles, a church, and a town hall). 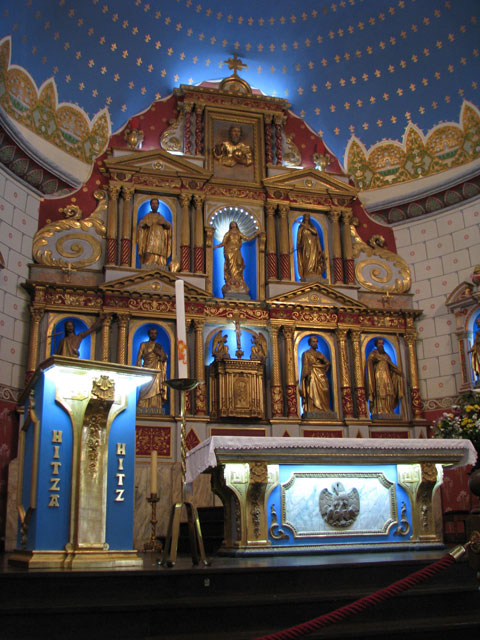 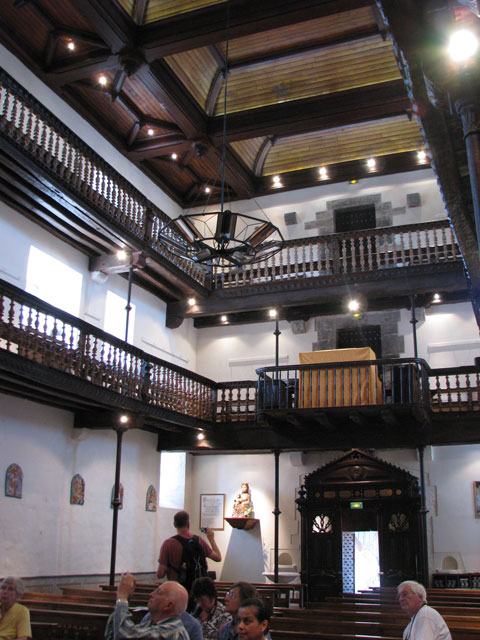 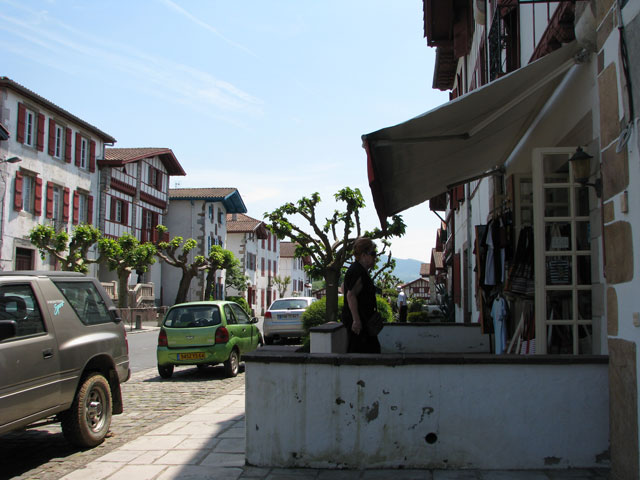 After that, we went to a farmhouse (Ortillopitz) that has been restored to exactly the way it was in the 17th century.  Since the Basques were great shipbuilders, the farmhouse had a lot of features (such as hallways) that were featured on Basque ships.  The house was fascinating and so was the host (who spoke French/Basque, which was translated by our guide).  At the end, they offered us some Basque cider (some of us liked it and some of us didn’t), a great red wine, and some cheese, dried meats and a traditional fruit filled cake from the Basque area.  It was great. 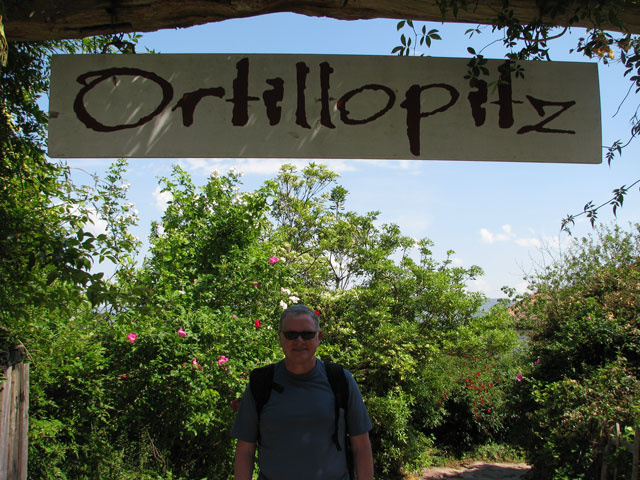 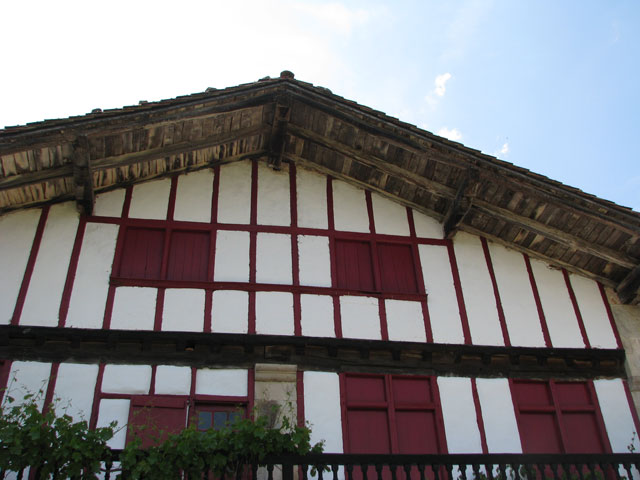 The east side of the house (all houses are pointed so the side without windows goes in the direction where the storms come in from the sea. 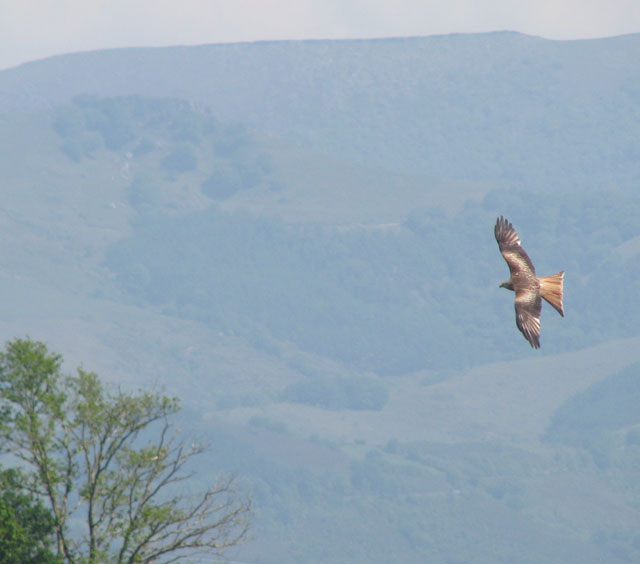 Julie snagged this amazing picture from the courtyard of the farmhouse. 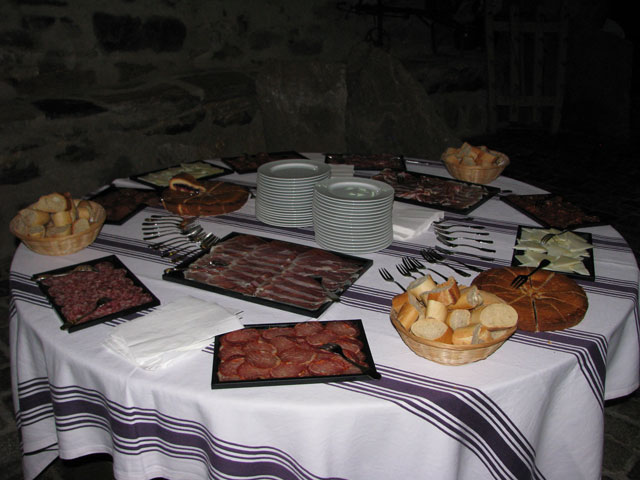 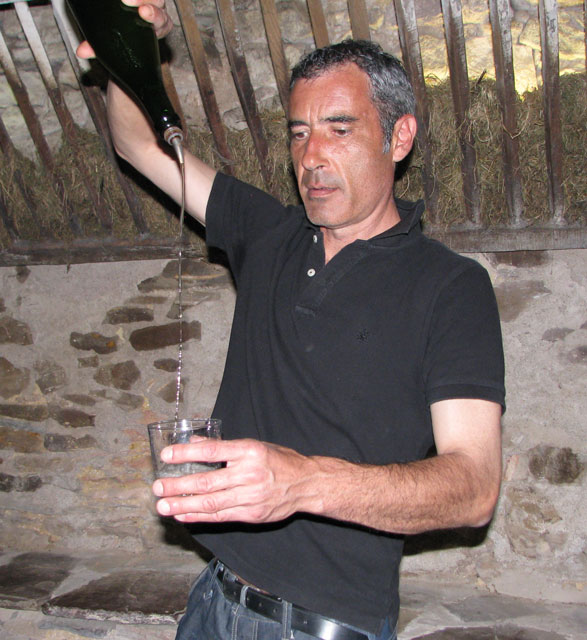 The host pouring the cider (he is the eldest of this family and we also saw his wife and two sons). 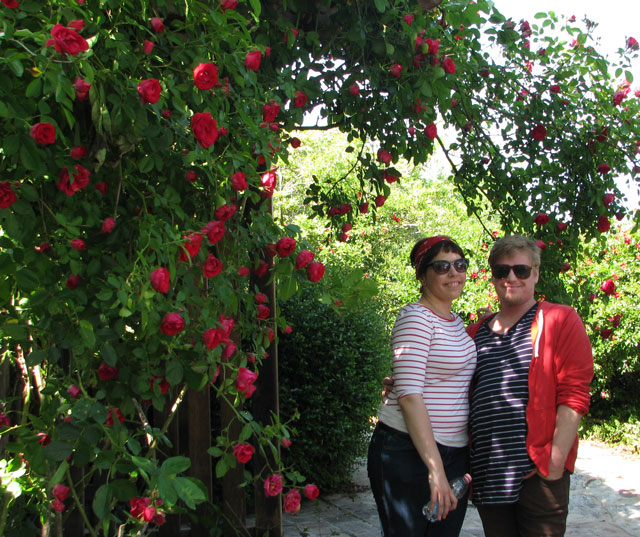 Part of the gardens.

After the tour and food, we returned to the port and were on the next to last tender back to the ship.  We then dressed and went to dinner in the dining room.  The entertainment was singer Michel Bell (who was a member of the group Fifth Dimension and also sang on Broadway).  He had an amazingly powerful and deep baritone voice.  After that, we went to the Avenue Saloon to listen to the piano player do a tribute to Elton John and Billy Joel.  It was a wonderful cap to a great day.
Posted by Bob at 9:30 AM