In this port, we had arranged a tour from Westcapades.  We had an eight passenger tour bus with the four of us and two other couples (Cookie and Larry and Bill and Patty).  Originally we were scheduled to arrive in port at 7am and our tour was to start at 7am as well, but due to the tides, we didn’t actually arrive until 9am.  We met down in the lobby at 8:45 and hung out until about 9:15 when they finally got things set up so we could board the first tender.  The President and his wife were on the tender with us.  It was funny, we were sailing in toward the pier when the tender driver, turned around and started to go into another entrance (they have two).  Then he decided that he was headed in the correct pier and eventually we made it (although we ended up being in the second tender at that point – ha ha). 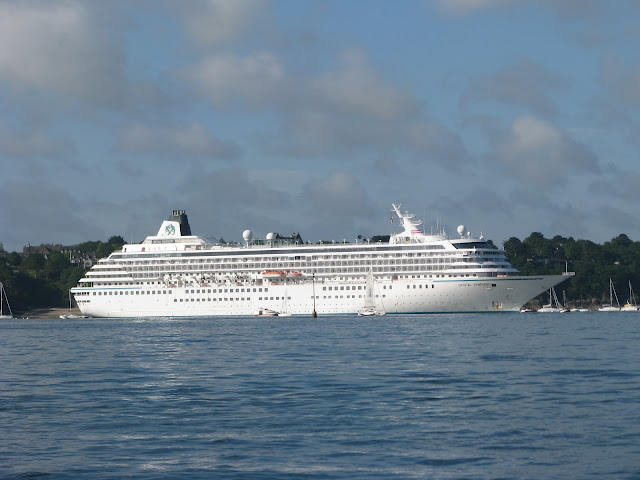 The folks from Westcapades met us inside of the terminal and we went out and got into their 8 passenger van.  Lucie was our guide (and she spoke beautiful English).  Interestingly, the seats in the van were extremely nice and comfortable.

St. Malo was very crowded first because it was a Sunday and second because Monday was declared to be a bank holiday, so everyone had a 3-day weekend.  Thus they were flocking to the beaches. 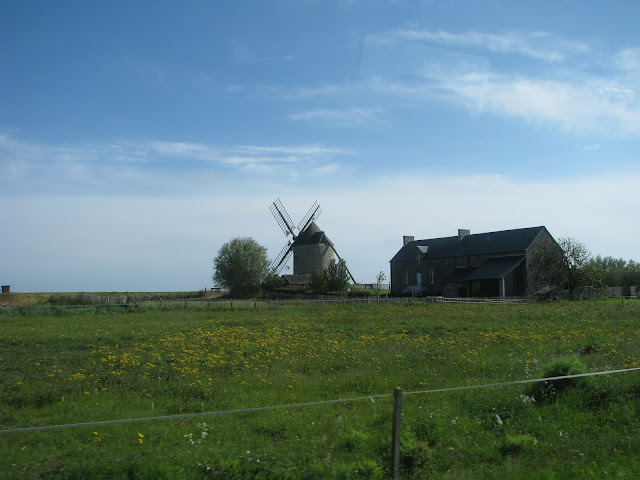 We drove the approximate 45 minutes to Mont St. Michel.  Our guide had a magic access code and we got so we could park right at the place where the shuttle takes you across the causeway.  Note – we remember when we saw it almost 20 years ago that there was no road and you had to walk across.  Our guide told us that there is a big renovation project going on to bring the sea back around the island.  It has been so eroded away by silt that Mont St. Michel is no longer much of an island. 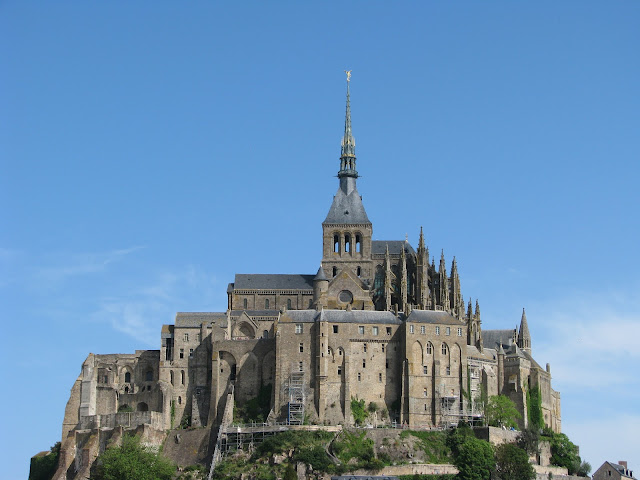 Our guide left us at the shuttle buses (apparently you can’t have private guides there) and gave us instructions.  Note – the shuttle buses are kind of cool, as they have a way to drive it at both ends of the bus, so they don’t need to turn around, they just drive down to one end, get out and change to the driver and drive back.  The first big item was she got us group tickets for fast track entry to the abbey (8 euros each).  This is important as the usual line to get in by buying tickets is extremely long.

She then said, as you get to the island, everyone is queueing up to go into the main entrance.  She said, go to the left (looks like an archway) and go up that way.  You bypass the long street where all of the shops are, you take less steps (180 vs over 300) and you get to the abbey quicker. 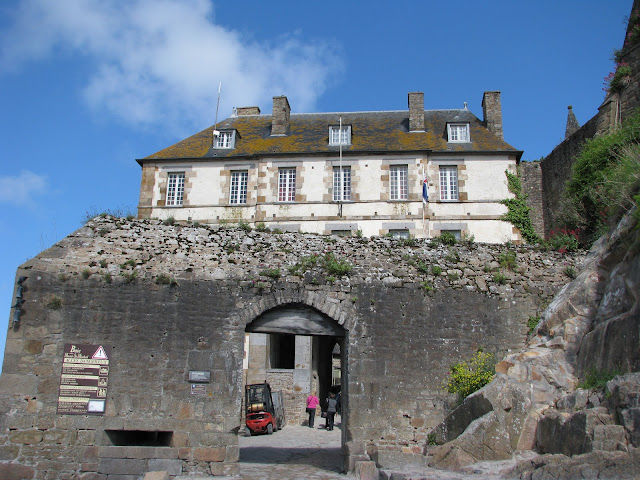 This is the entrance that you go into.

Wow, was she right.  It was like we were at the abbey in no time.  (We learned later that the streets were so crowded going down that we hardly could move.).

The group tickets let us bypass a huge “buy tickets” queue to get up where you entered the abbey.   We were not able to get the audio sets for listening to stuff (we think that they were in the other queue), but we did get in quickly.  They were holding some kind of service in the abbey when we got there, so we had to be really quiet.  Then we started the trek down through the various rooms, crypts, etc. of the three levels of the building.  They were all quite fascinating. 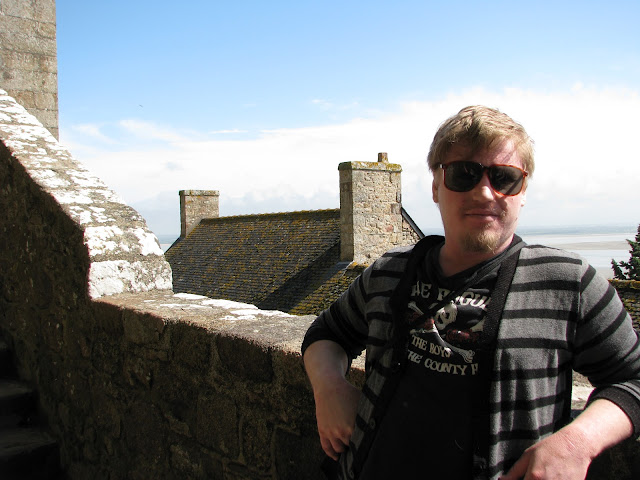 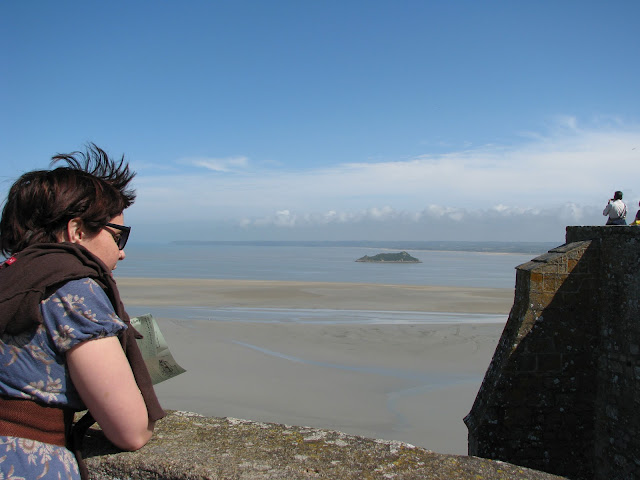 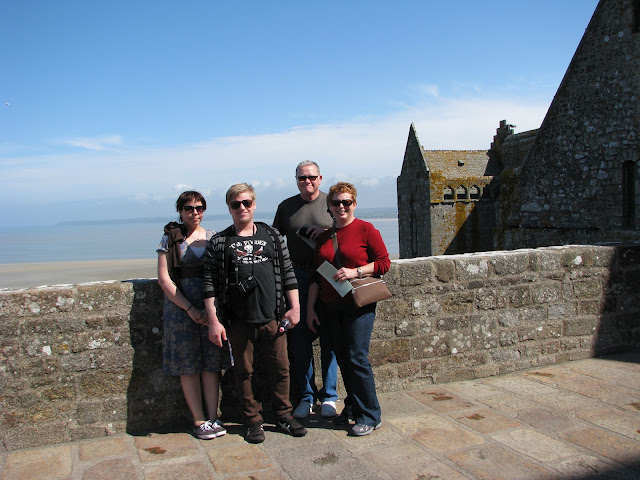 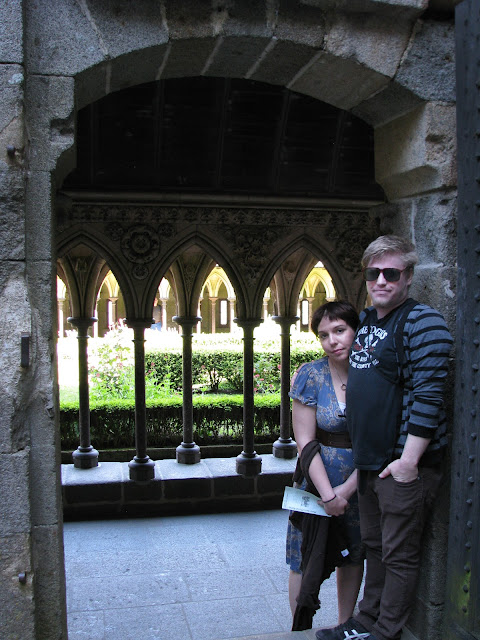 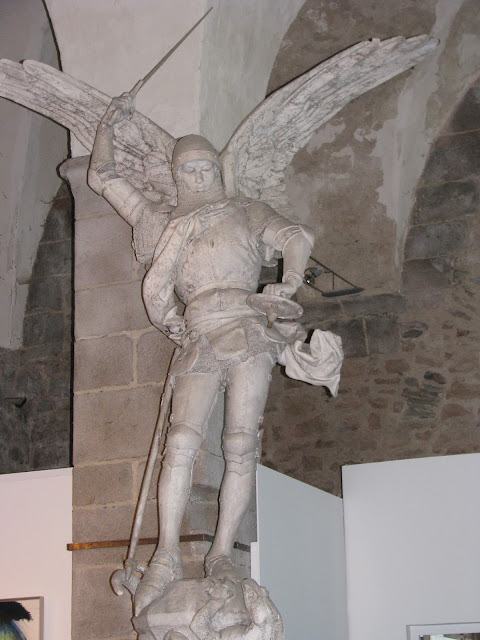 This is St. Michel. 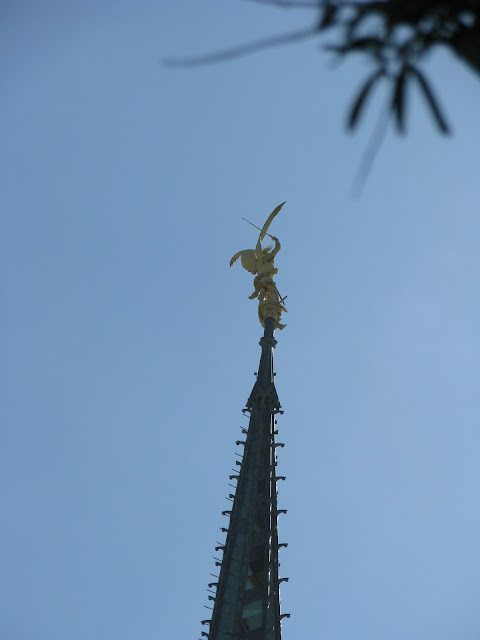 Eventually we emerged and made our way back down, but this time going through the streets.  It was SO crowded that often you got trapped and had to push your way through.  It was nuts.  Fortunately we were going down (we saw a Crystal excursion making its way up through the streets while we were going down), so they had a long day in front of them. 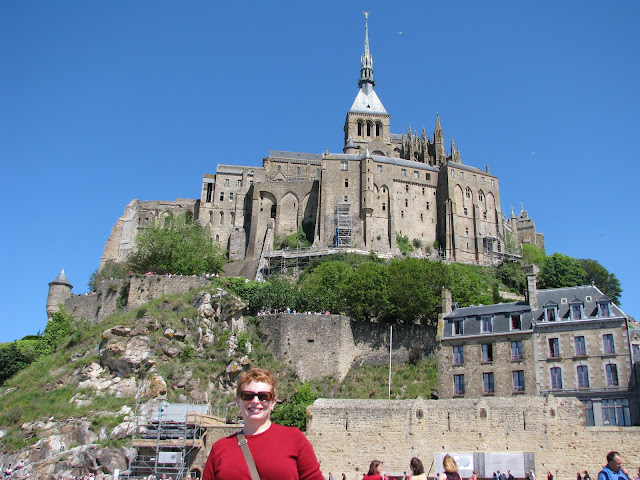 We made it out of the hoards, back to the shuttle, and back to the van, a bit after our scheduled time (12:30).  All eight of us headed toward the town of Dinan.  Dinan is an old city with numerous medieval buildings.  Lucie dropped us off near one of the churches and we agreed to be back at about 3pm.  Again, she didn’t guide us, we were on our own.  The goal was to wander around (she gave us a nicely marked map) and also stop and get lunch.  She recommended galette (a heavier crepe made out of buckwheat flour filled with eggs, veggies, or whatever filling.  you eat with your hands like a burrito) and then a Crepe with local Caramel inside.  Also, we were supposed to taste the local cider (they can’t grow grapes around here, just apples and make their drinks with apples). 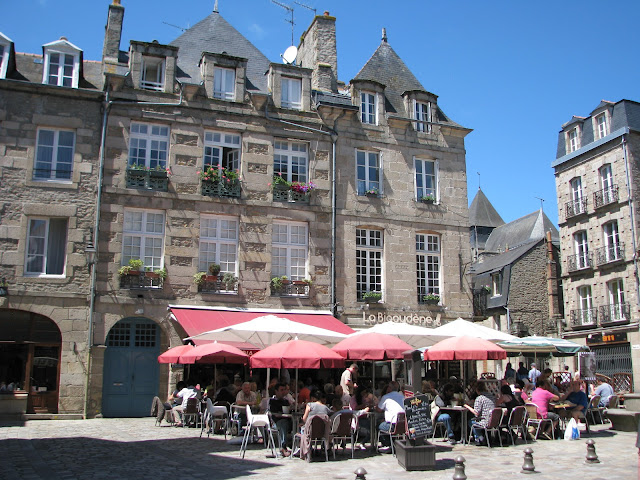 The restaurant that we went to is the one on the right. 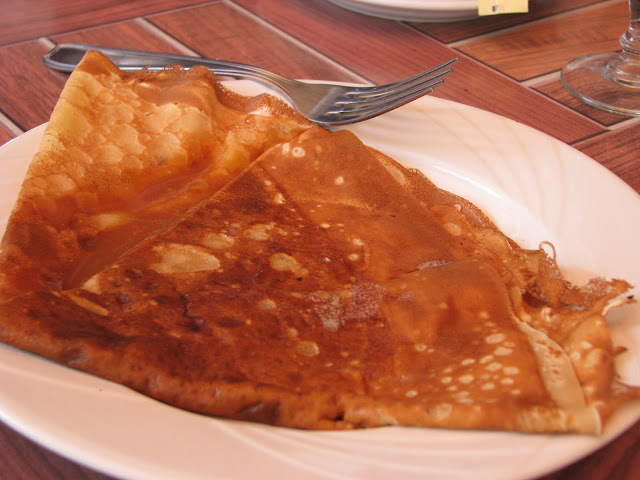 We stopped at a local restaurant and ate outside having their prix fixe meal of a Galette, Caramel Crepe and cider.  It was excellent.  It was also entertaining as sitting one table away from us (in a different restaurant) were about four guys who were obviously celebrating some soccer team or something, yelling, singing, and getting really drunk (yes, this was at about 2pm).  We then wandered a bit and headed back to the van.

After that, she drove us to the walled city of St. Malo where our tender was located.  She dropped us off at the gates of the city and our tour ended there.  We had time to explore the city (mostly walking on the ramparts which takes about 40 minutes to walk around the entire city).  Then walk over and catch the tender back.  The city was really beautiful in wonderful shape.  Amazingly great shape.  However, we remembered that Lucie told us that much of the city had been destroyed by bombing and after the war was over it was completely restored to its exact original shape – which is why it looked so good).
One cool thing that we saw near the city was a swimming pool in the ocean.  Essentially they built 3 sides of a swimming pool out into the ocean.  The top side was just the beach.  Clearly, the pool is filled with water when the high tide comes in, otherwise it gets caught there during low tide.  They even had a huge diving board with multiple heights for diving. 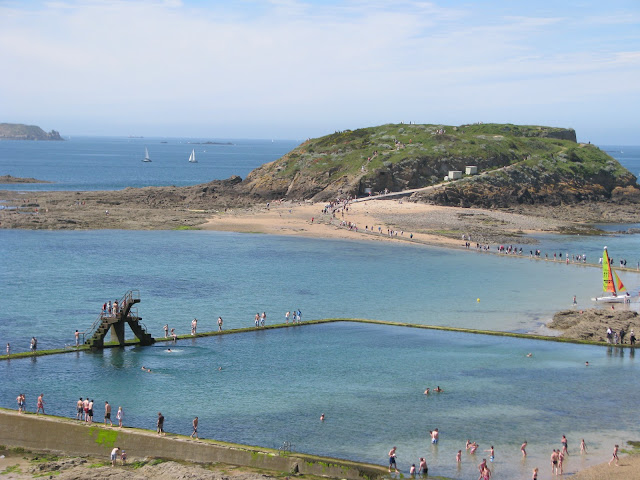 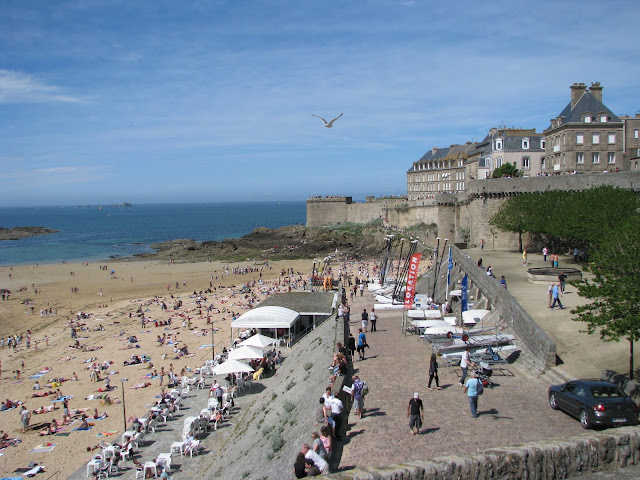 Eventually we made it back to the ship for another evening of dining and relaxing.  Sail away at about 8:30 was quite spectacular with St. Malo off in the distance and the sounds of “It’s a Wonderful World” playing in the background.  BTW – we ended up skipping the entertainment (a variety show of the Kent Dancers, the Scottish brothers, and the comedy piano person). 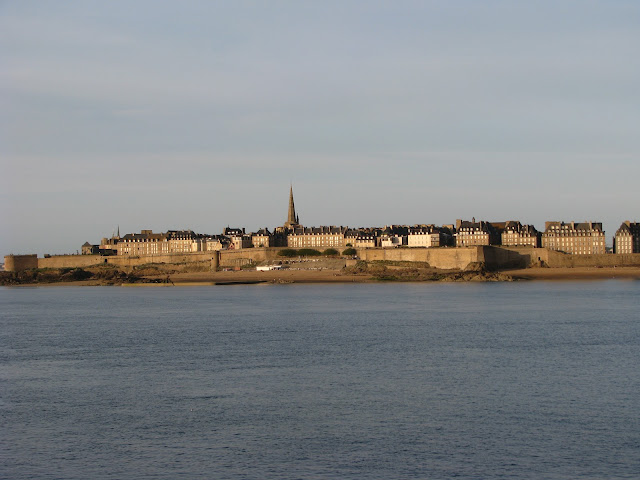