When we got to FCO at about 8:30 (scheduled to arrive at 9:30), we went through immigration, grabbed our bags and headed out to meet our ride from Bob’s Limo’s aka Rome Limousines.  We were told to wait by the meeting area for our driver.  The tail wind got us there about an hour early, so we hung around for a while waiting for them to show up.  Eventually our driver appeared with a sign with Julie’s name on it and we followed him to a van that would take us the 40 minutes to Civitavecchia, where we hoped that the Crystal Serenity would be waiting (for one of  our voyages on Crystal we took a train from London down to Dover to meet the ship, but it couldn’t dock there the night before and it was actually in Southampton).  The weather was cloudy and sprinkled a bit on the drive, but when we arrived, it was nice.  The ship was actually waiting and so we were in luck.
We had to wait in the terminal for about two hours while they set up to check our passports, tickets, and other documents.  Before that time, a person came around and grabbed our tagged bags and gave them to a porter for boarding on the ship.  At about noon, it was finally time and we had our documents verified, answered that we were not sick, went through the metal detectors and boarded the ship.  We dropped our carry-on luggage, checked in, and received our room and identity key cards.
We went to the dining room, were seated by a window and enjoyed a glass of champagne.  Bob had his usual (Cobb salad) and Julie had her’s as well (Salmon).  The food was excellent as we had hoped. 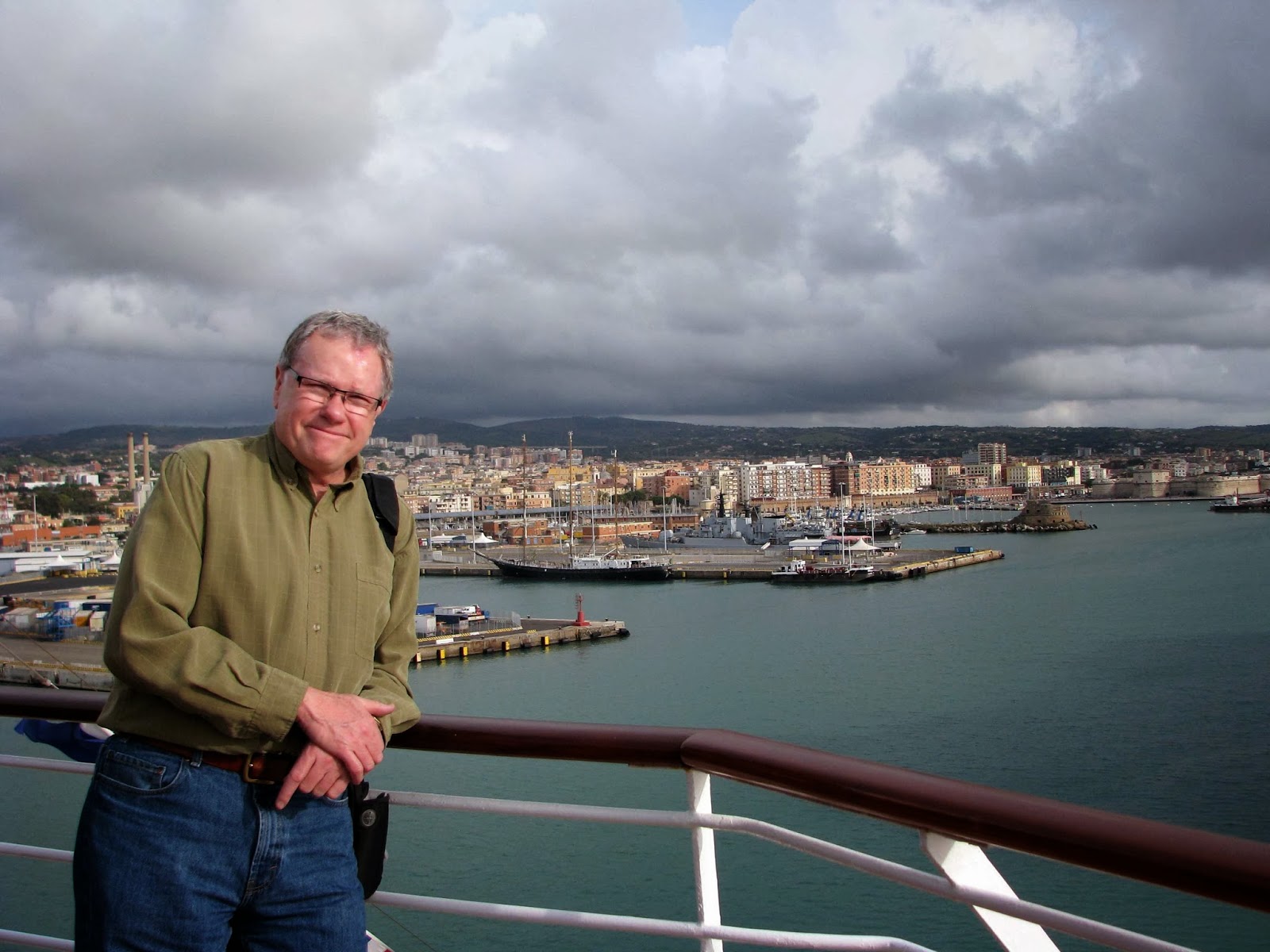 After lunch we explored the ship.  Having sailed on the Crystal Symphony four times and this being our first time on the Serenity, we were struck by how same, but different the two ships were.  The Serenity has an extra floor of cabins (the ship holds about 1070 people) and most of the venues are either on different decks or in different locations.  The Starlight club is located in the middle of the ship and is where we would spend a lot of time on the Symphony.  It is called the Stardust club and is aft on the Serenity.  Julie took a short nap up on deck and Bob decided to try and stay awake so we didn’t both sleep through the evening.  Eventually 3pm rolled around and we were allowed to go to our room (our window guarantee had been upgraded to a balcony).
The cabin seems roughly similar to the Symphony although a bit larger (we later confirmed that they are 20 sq ft larger), but the addition of the balcony is wonderful. We then unpacked and got ready for dinner at 6:15 in Prego.  Before dinner, we went to the Crystal Cove with the intention of possibly meeting up with our Share the Experience guest (he wasn’t sure if he would get out of Rome early enough to meet us).  Unfortunately it didn’t happen. 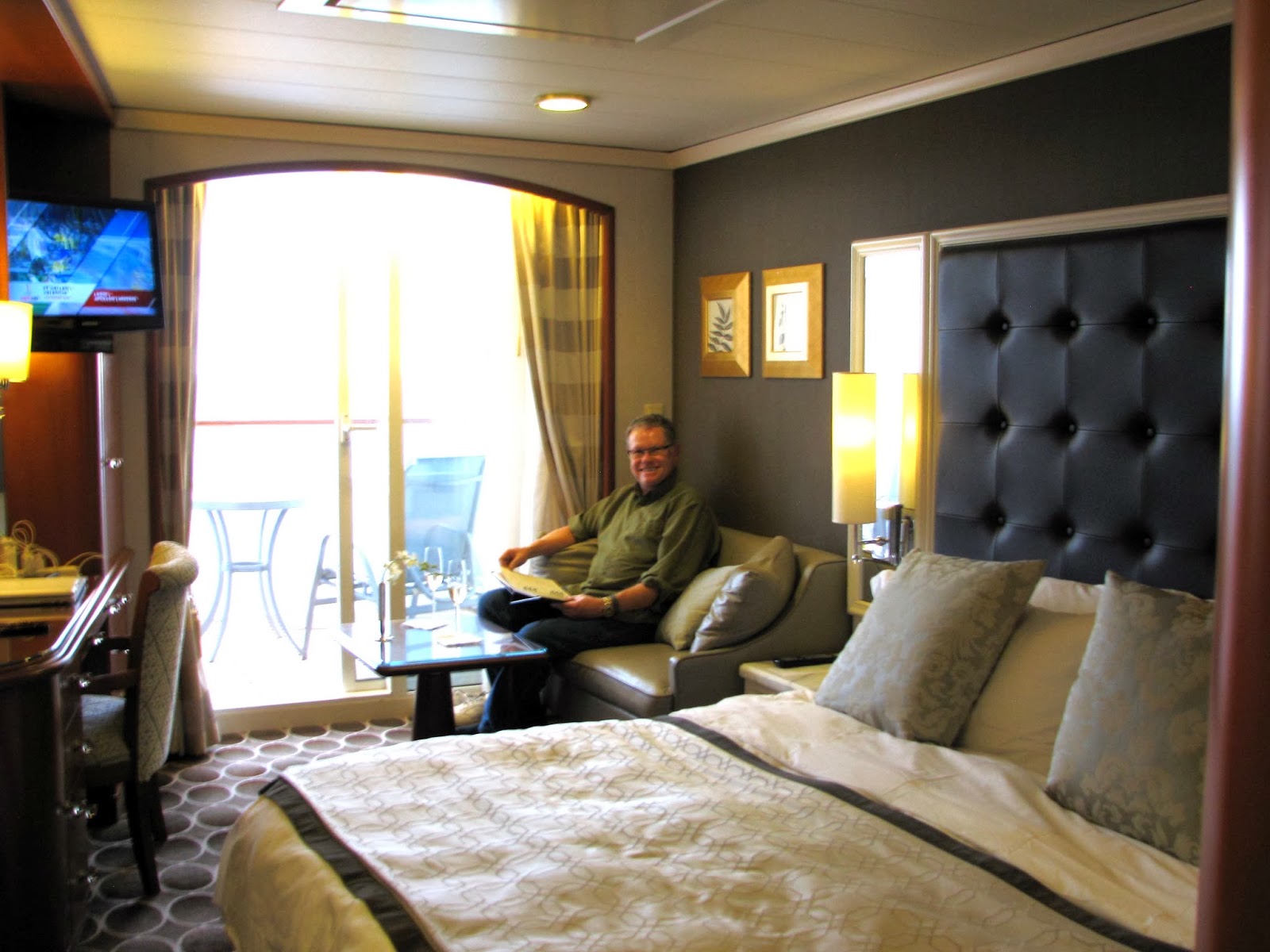 Dinner in Prego was great.  The mushroom soup in the bread bowl was as good as ever.  Although Bob thought that the Lasagna was not quite as good as the one on the Symphony.   We finished dinner at around 8 or so and were debating if we should stay up for the welcome aboard show at 10:15 (sail away was at 9:00).  We were both pretty tired and ended up bailing and just hitting the sack soon after sail away.