So, we woke up at 6:30 as we were going on a ships tour to Monterosso in Cinque Terre.  We found out by watching the morning show by the cruise director (oh wait, it is called the morning update which is about 4 minutes long as opposed to what Paul does over on the Symphony which is an entire show).  Anyway, due to high winds we could not get into the Porto Venere area, but instead went into Le Spezia.  It turns out this is just about a mile from PV, but behind a breakwater.  The winds were definitely on the stronger side, but the breakwater really helped. 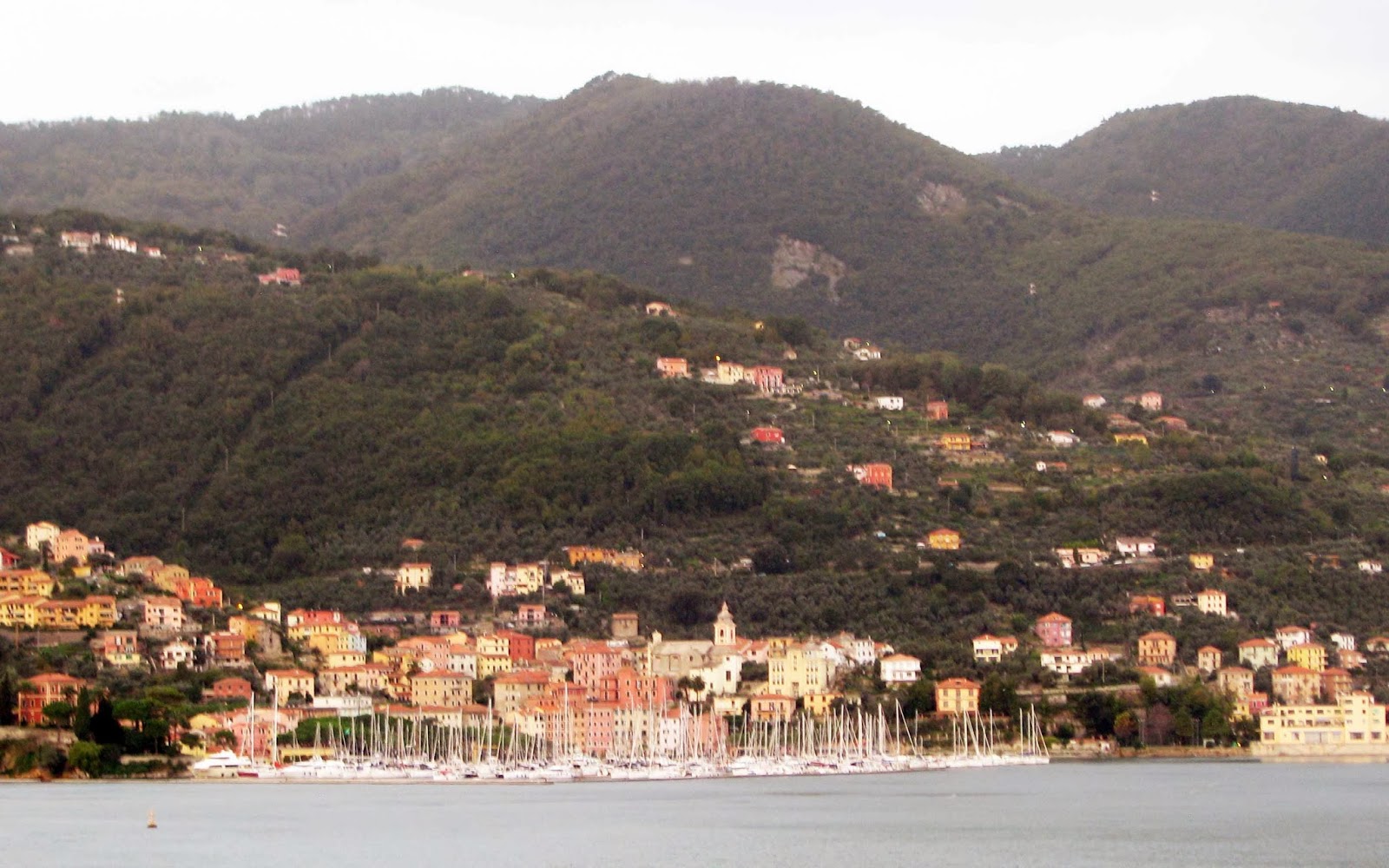 We had our usual breakfast and headed down to the Stardust lounge to find out if our shore excursion would have to be adjusted (The cruise director had said that all excursions were still going to happen).  There was no effective change for us.   We left the lounge at our appointed time (a bit after 8am) and headed for the tenders.  We boarded and left.  There were 22 of us on this tour, plus one of the ship’s crew (the bridge instructor).  As we were sailing along, I noticed that the pilot was calling on the radio and standing up in his seat, almost like he didn’t know where he was going.  Eventually we were getting closer to shore when we heard loud and clear in English- tender number one heading for the shore - you are going the wrong way!!!  It is tough being the first tender out.  Anyway, we eventually found another tender that knew his way in and so we were the second tender to arrive.  Pretty funny!!!
After landing, we met up with our tour guide: Giacomo.  We then walked about 500 yards to an awaiting bus which we boarded heading for the train station.  We weren’t able to quite get all the way to the station and were let out a couple of blocks away.  Eventually we made it to correct track and made our 9:25 train.  The train basically goes through a massive network of tunnels and visits all five of the cities (Monterosso is the fifth and last city).  The train then goes on up through Genoa, the last city in Italy.  As the train peeked out of each tunnel at the station in the various cities, we noticed that it was starting to rain and got our rain gear on.
We got off the train and it was definitely raining. 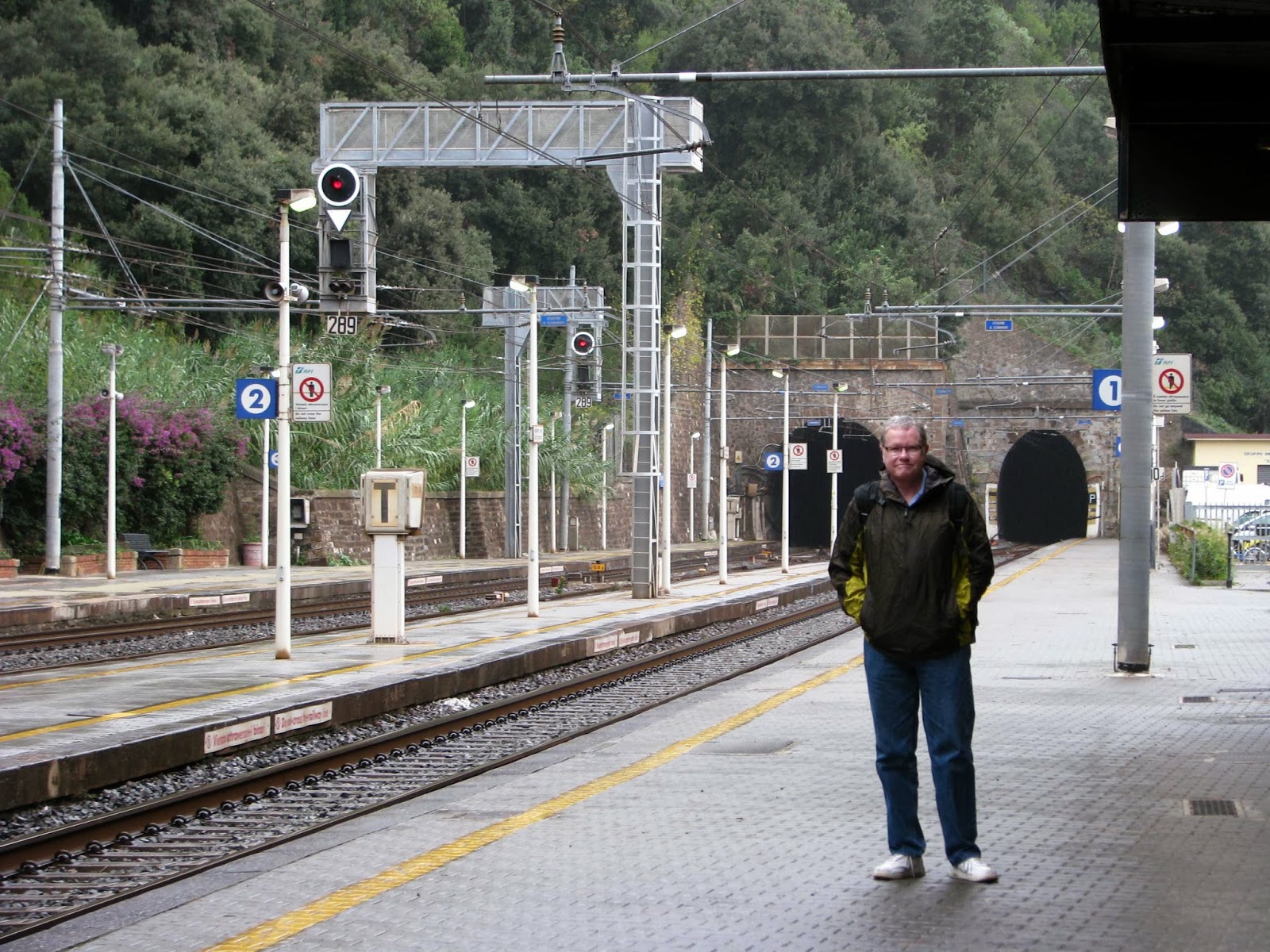 Our first stop was a house built in the early 20th century that has a statue of Neptune that was holding up a massive dance floor.  Made out of concrete, it didn’t last great, but you could still see the statue.  It was definitely seriously raining now. 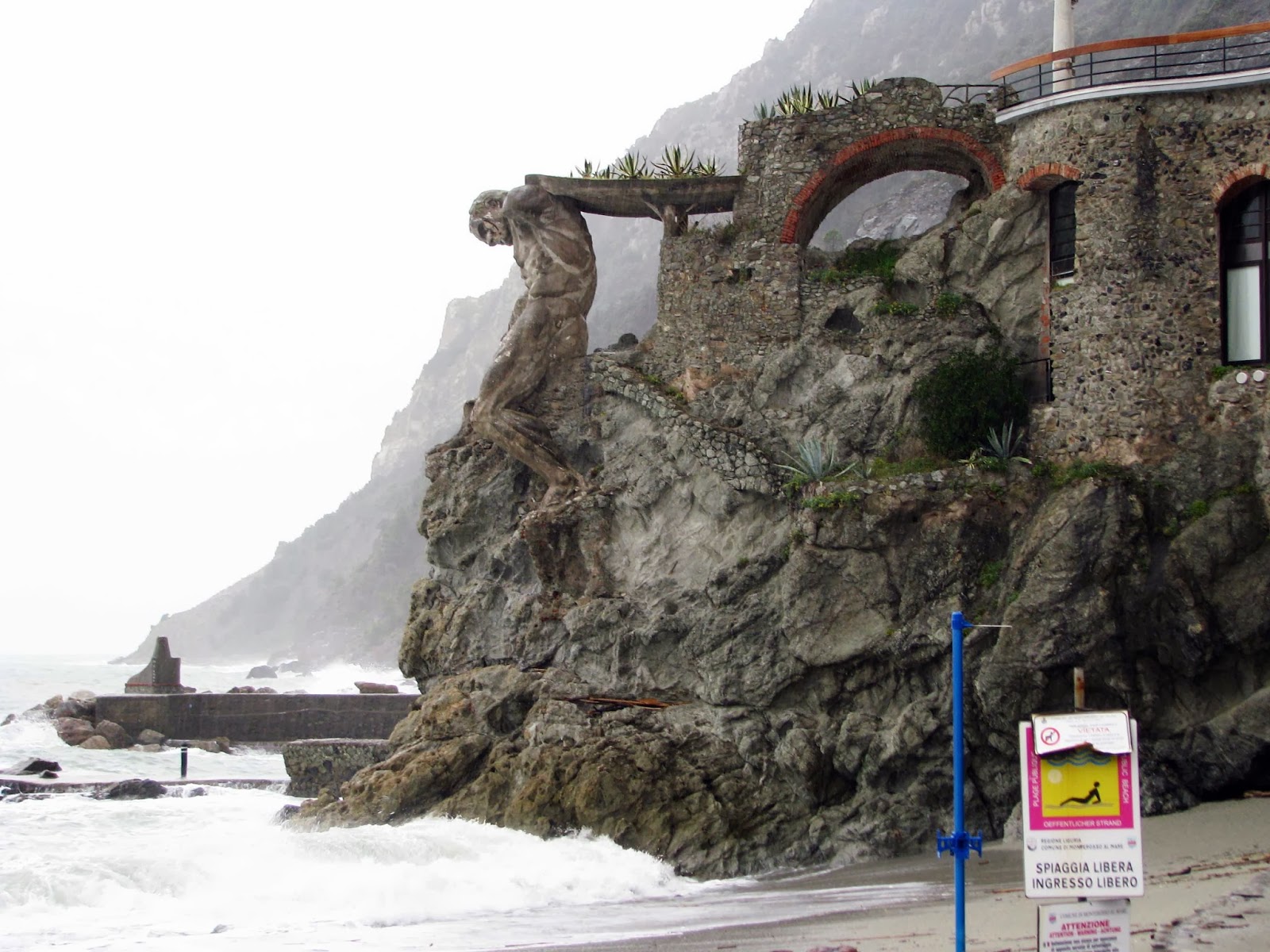 We turned around and walked from the new town, through a tunnel into the old town.  The new town grew up around the train station, which was constructed in 1860. 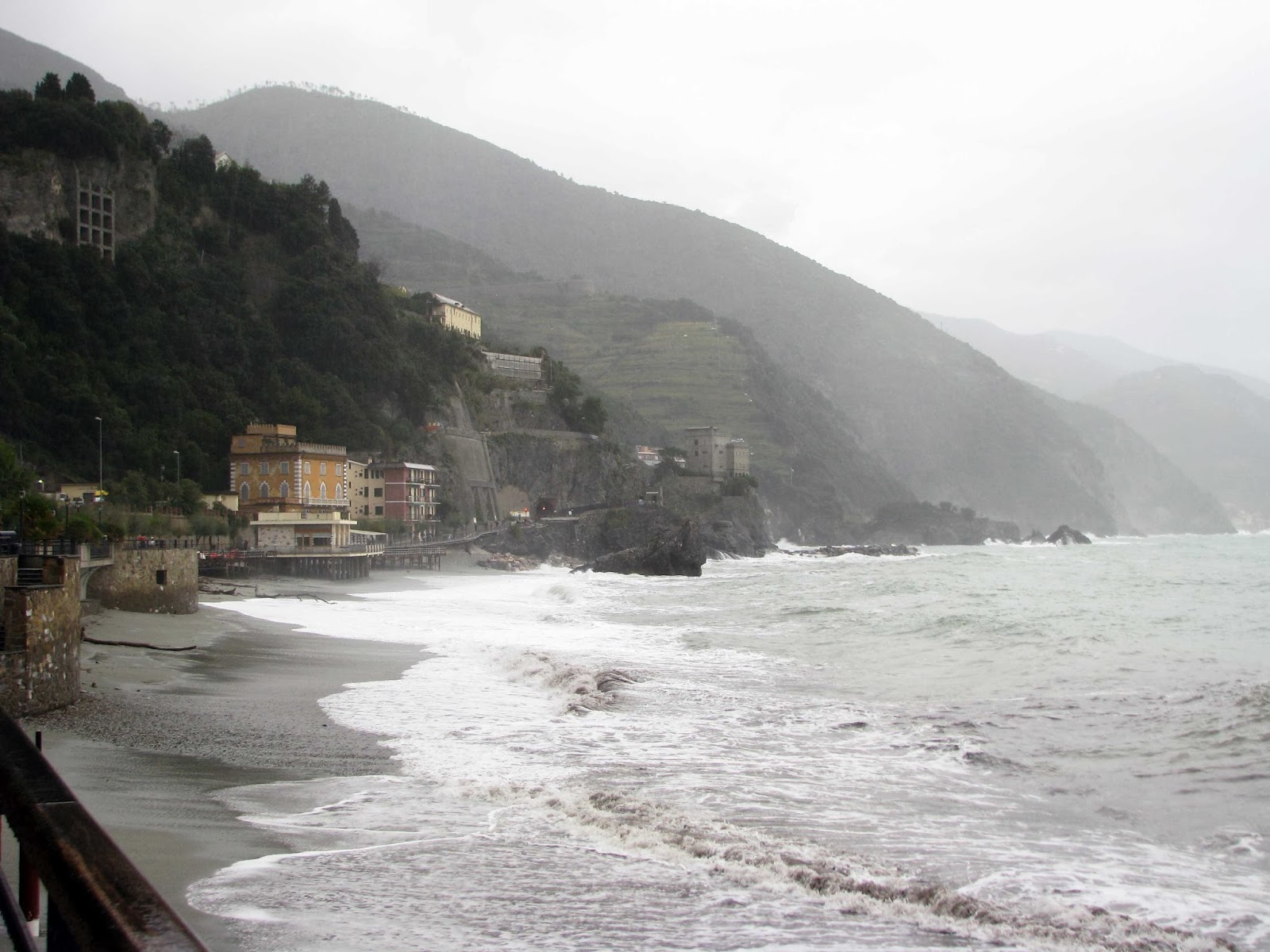 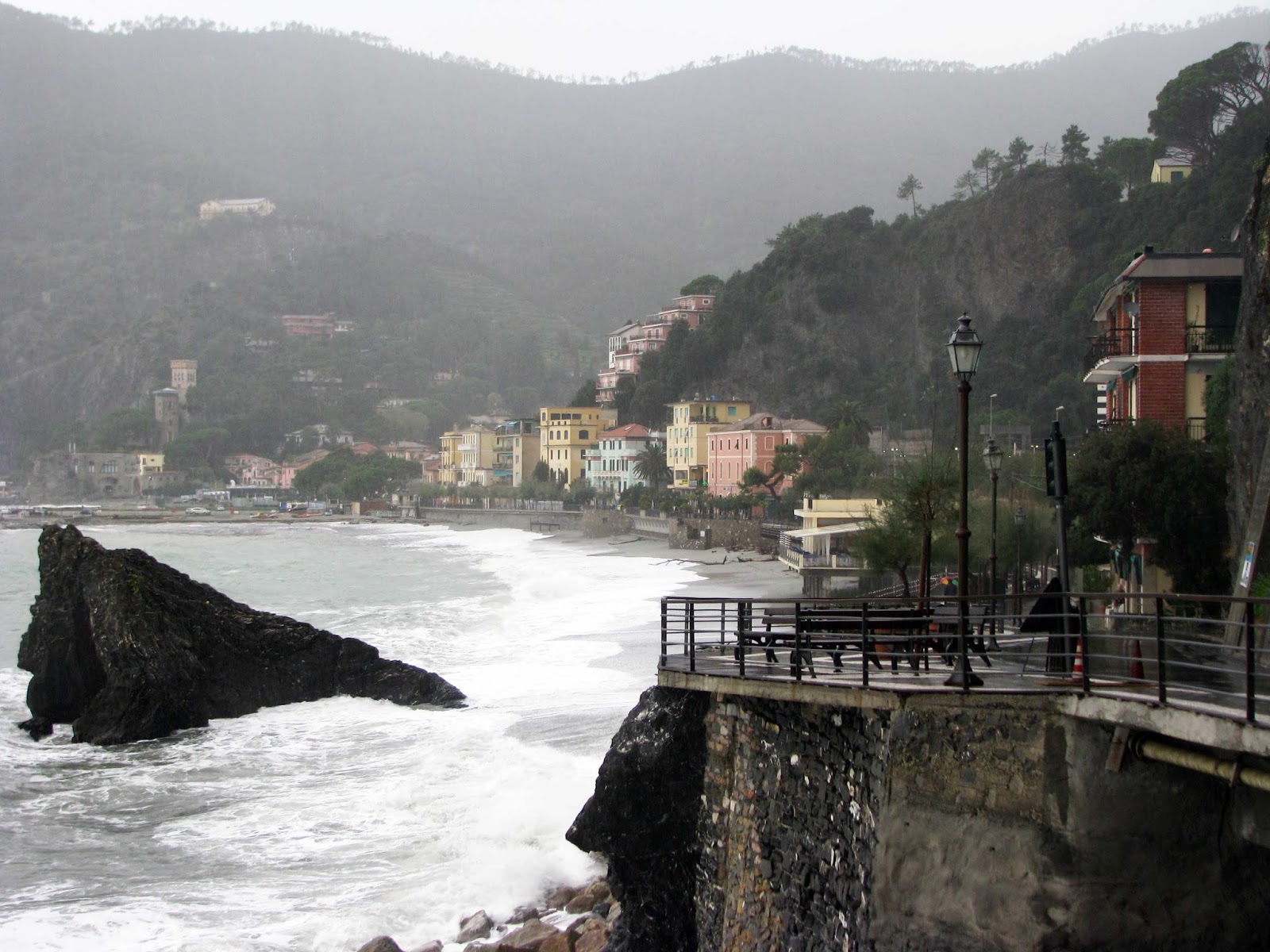 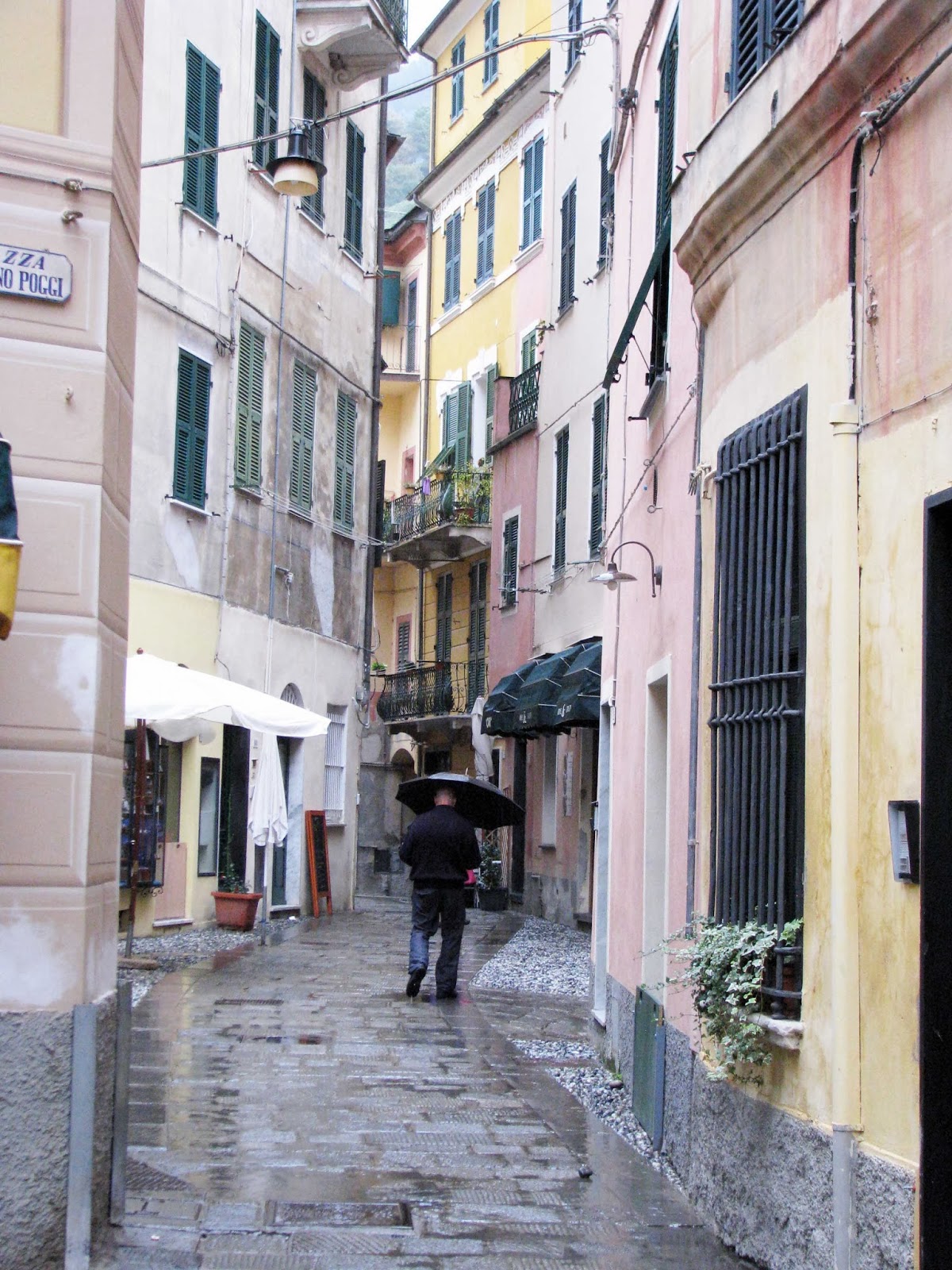 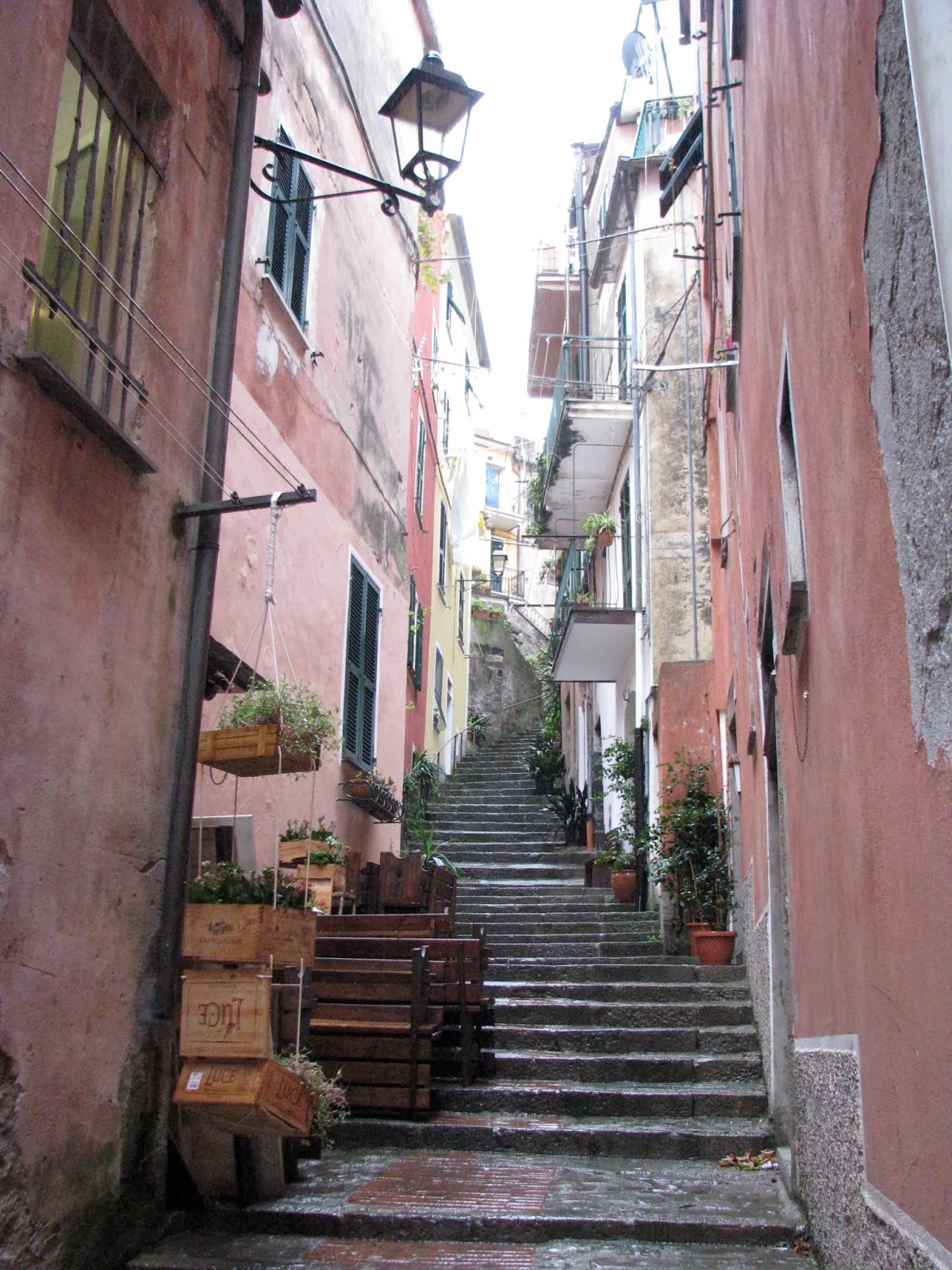 We visited three churches and wandered the many small streets.  The first church was owned by the Catholic church and had really interesting columns.  The other two churches were owned by the people and were called Confraterniti (?)  - something like fraternity we think - which was constructed as a social organization to help people.  The first one was a black church organized to help orphans, widows, and pay for funerals.  The decorations had skeletons all over the place which was fascinating.  The white church was there to help support the hospital. 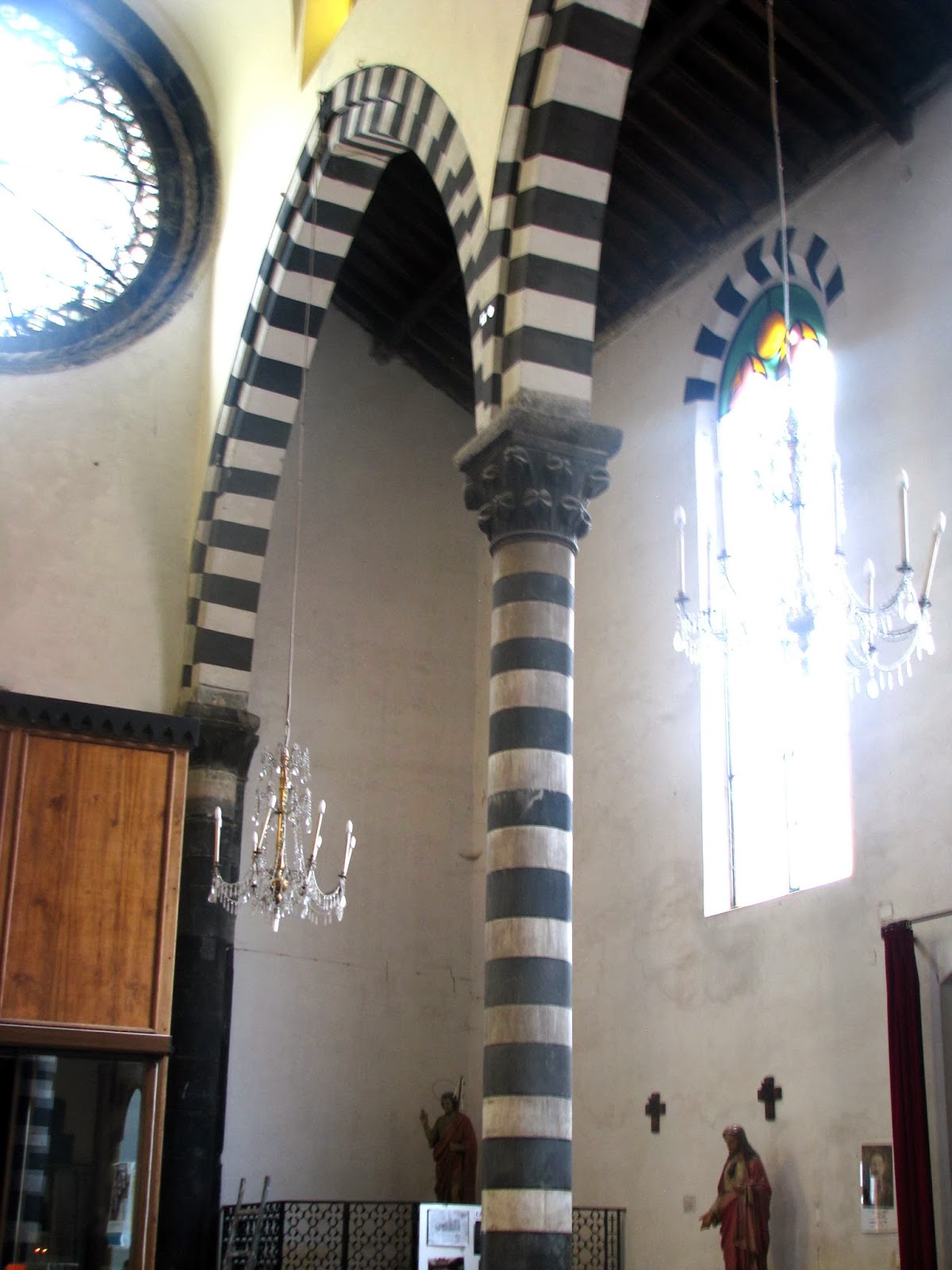 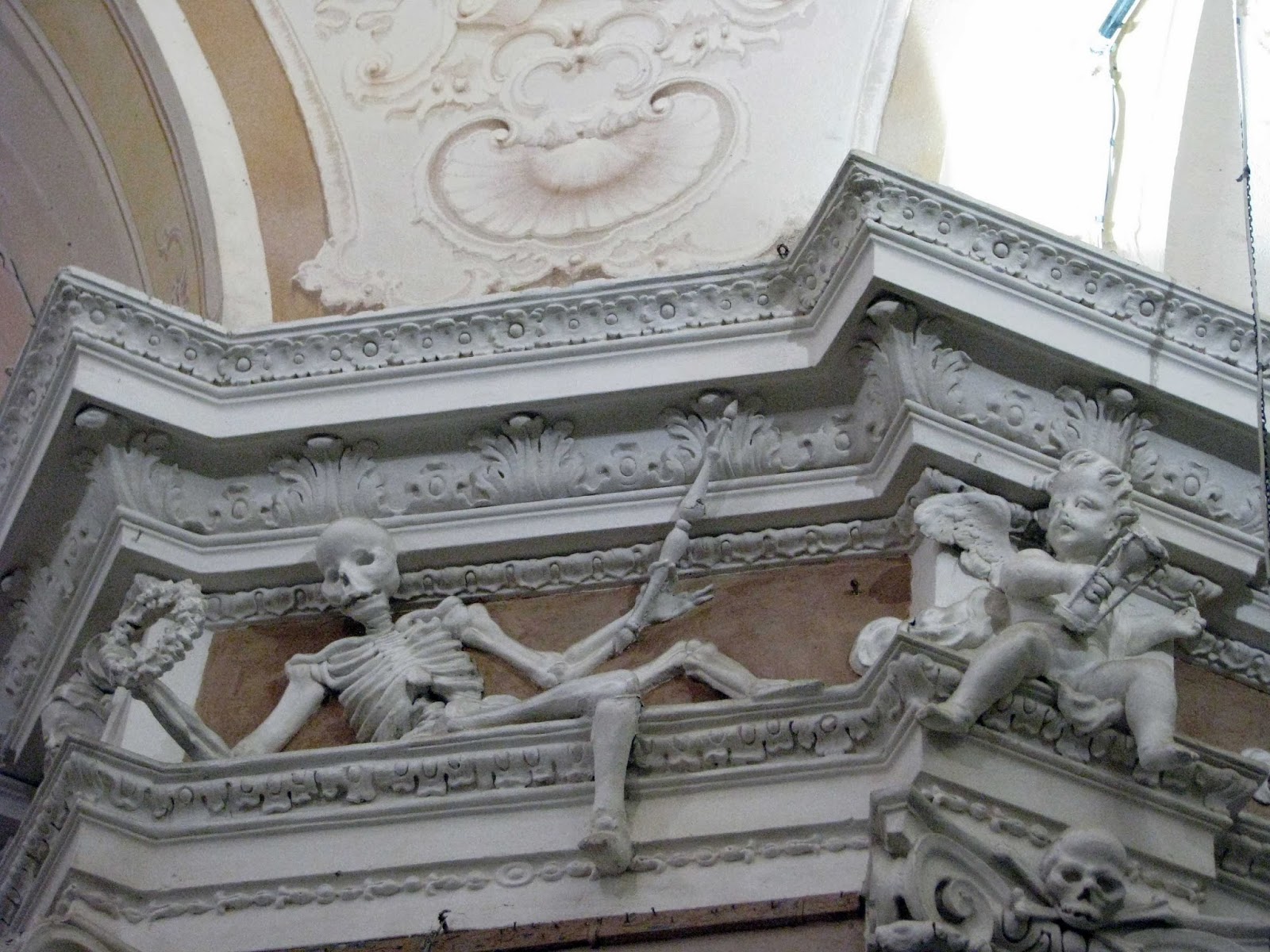 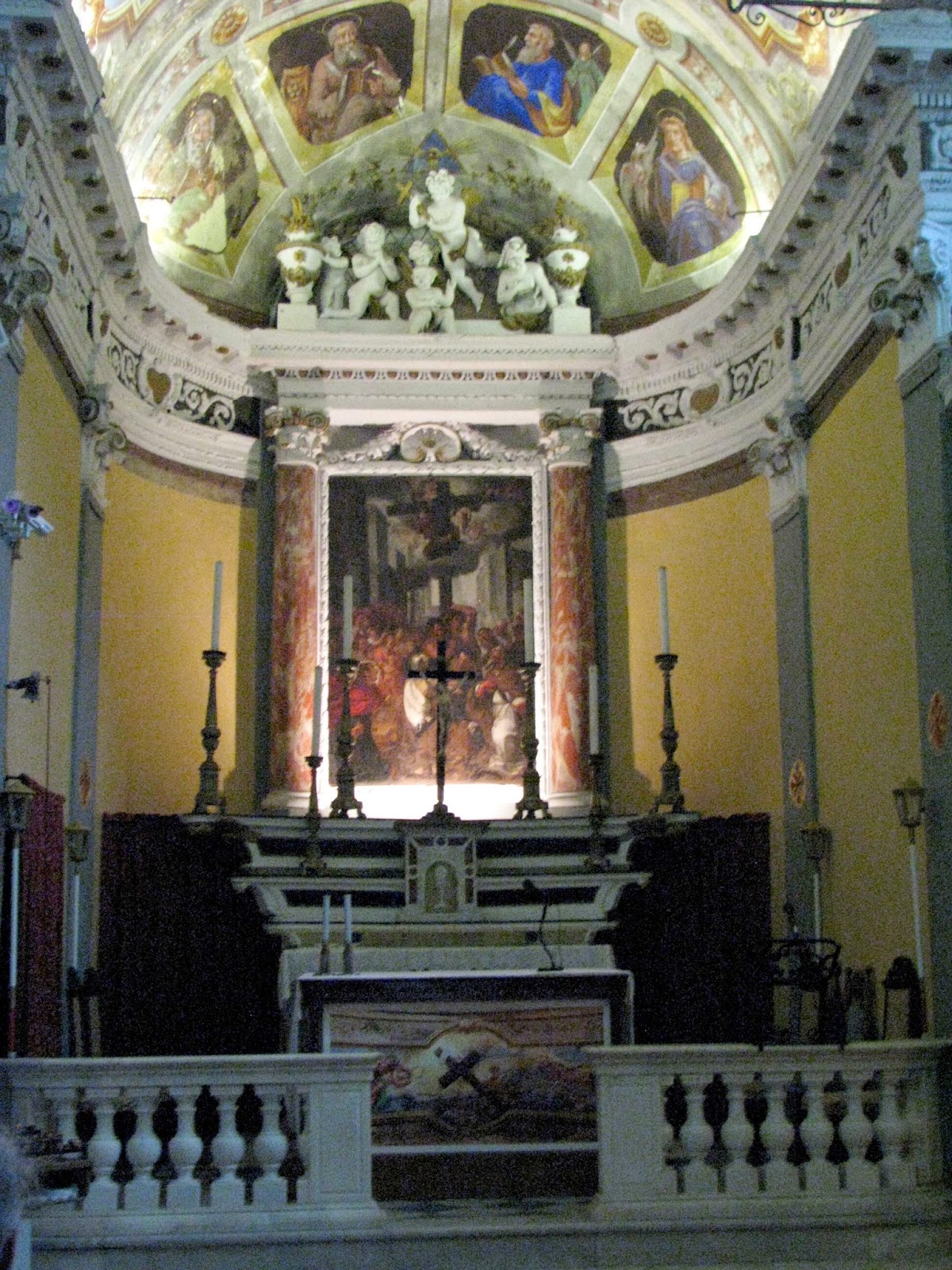 We wandered around a bit more and then it was 11:50.  Our guide said that we were supposed to take the train back at 2:45.  Everyone felt that was way too much time for lunch and then to wander the city when it was so miserable from all of the rain.  So, we decided to catch the 1:14 train back.
Some folks ate in the old town, but Bob and Julie decided they wished a lighter lunch and ended up having two slices of pizza, a glass of wine each, and a latte machiato at the little restaurant in the train station.  All for 9 Euros.  It was inexpensive and very tasty.
We managed to all make it back to the train on time, rode the train back, and got back on the ship.  The captain decided to leave the ship in the harbor as he believed that the waves would lessen in the evening and it would allow the formal night and the production show to happen under calmer seas.


Tonight is formal night, so we spent time getting un waterlogged and getting dressed up.  Eventually we made it to dinner at 6:15 (barely).  The food was excellent, Julie had Maine lobster (timing didn’t work out and she didn’t get any Maine lobster when we were in Maine two weeks ago, but she managed to get it in Italy - go figure), and Bob had the Ribeye steak.  After dinner, we went to the production show, which was a snippet of several musicals blended together, culminating in several numbers from Mama Mia.